A golfer who carried out a racially aggravated attack on an Asian taxi driver after wrongly linking him to the killing of Drummer Lee Rigby was jailed for seven months.

Drunk Kevin Dunne, 57, was on a golfing holiday with friends when the attack on Shabir Ahmed happened after the driver dropped them at Newport’s five-star Celtic Manor Resort around 12.15am on May 26.

Newport Crown Court heard Dunne said: “You know what happened last week in London? It was one of your brothers who done it. Where are you from?”

Dunne then head butted him and punched him twice in the face, which loosened a tooth.

Mr Ahmed grabbed a wheel brace in a bid to defend himself as he returned to his taxi to call the police.

A security officer at the hotel intervened and asked Dunne to calm down, but the bricklayer, of Wakeman Grove, Birmingham, continued his tirade of abuse, telling him“**** off you Welsh ****”.

Police attended and handcuffed Dunne, but he shouted: “People have fought and died for this country and I am the one in trouble? You lot know what I’m on about, there’s been trouble this week. Are you Welsh? I would expect this from you lot. He came at me with a bar and you are taking his side even though he came at me.”

During interview Dunne admitted he was “intoxicated” and agreed he attacked Mr Shabir but denied any racial abuse.

Jason Howells, prosecuting, said Dunne told officers he tried to bear hug the driver because he had seen Asian men coming at people with curry paddles and thought he was going to be attacked.

Dunne was fined £110 and ordered to pay £85 costs by magistrates in Cwmbran for a public order offence relating to his abuse of the security guard and police, the court was told.

Louise Warren, for Dunne, said her client admitted the racially aggravated assault at a hearing on June 13 and referred Judge William Gaskell to a pre sentence report. Judge Gaskell, asked: “He does have a problem with Asians doesn’t he? He admits he has racist views about them.”

Ms Warren said Dunne had bad experiences with Asian people in the past through his line of work and said he had been “open and honest” about his views in interview. She said coming to court was a big shock for him and since the incident he had only had one alcoholic drink as he realised it had got him into a lot of trouble.

Sentencing Dunne to seven months in prison, Judge Gaskell, blasted him for getting “hopeless drunk” and said his actions were “obnoxious”.

He said: “First of all you referred to an atrocity that occurred in London, suggesting that was in some was his responsibility. It quite clearly wasn’t. In fact on the basis of what we know it wasn’t the responsibility of someone in his racial group, but it was something you pursued.”

“The racially aggravated part is significant, that leaves him (Mr Shabir) with an ongoing persistent fear that he’s going to be subject to further assault for no other reason than that he is Asian.”

Supt Mark Warrender, Gwent Police’s hate crime lead said: “We are firmly committed to working with partners and communities to stamp out all forms of hate crime and deal robustly when it is reported. No-one should tolerate this behaviour and we would encourage members of the community to report any incident where they feel a hate crime has been committed.”

His Facebook page indicates that Dunne is an admirer of National Secular Society “comedian” Pat Condell. (The “Like If You Want The Terrorist Abu Qatada Kicked Out Of The UK” Facebook page from which the video is taken is currently promoting Liberty GB, the far-right political party led by Paul Weston.) 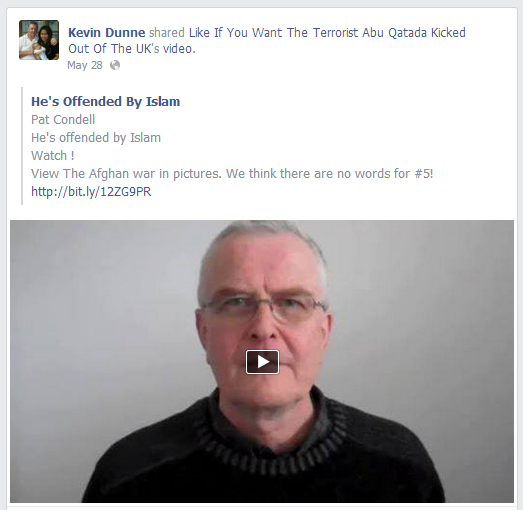