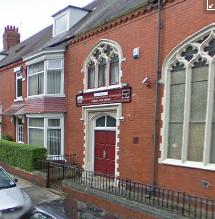 Two men and a youth were arrested earlier today after a “large scale disorder” in Darlington – believed to involve members of the far-right English Defence League.

Police attended the North Lodge Park area of the town at 4.20pm after a group of around 30 gathered near the Jamia Mosque. Superintendent Paul Unsworth said: “These people were acting in a rowdy, abusive and offensive manner and we believe their actions were racially motivated. Officers attended to ensure the crowd dispersed without causing further disruption or disorder.”

Supt Unsworth appealed for anyone in the North Lodge Terrace or Gladstone Street area and who has information regarding the incident to call police on 0345 60-60365 or Crimestoppers anonymously on 0800 555111.

It is understood that the group may have attended an English Defence League rally on Teesside earlier in the day.