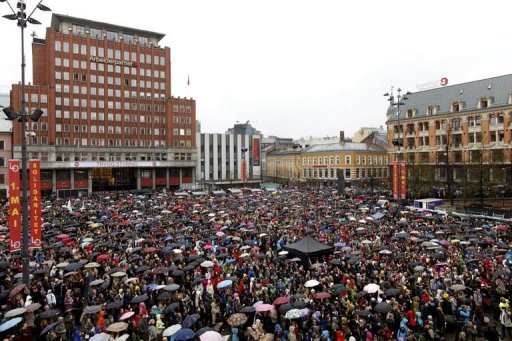 Tens of thousands of rose-waving Norwegians gathered in rain-drenched Oslo Thursday to deride mass murderer Anders Behring Breivik by singing a song he hates, viewing it as Marxist indoctrination.

Some 40,000 people, according to police, massed in the rain at a square near the courthouse where Breivik is on trial for his July 22 attacks that killed 77 people, to sing “Children of the Rainbow” by Norwegian folk singer Lillebjoern Nilsen.

Inside the court, the 33-year-old accused right-wing extremist sat listening without showing emotion to powerful testimony from survivors of his bloodbath on the ninth day of his trial.

Last Friday, Breivik had said that Nilsen was “a very good example of a Marxist” who had infiltrated the cultural scene and that his song was typical of the “brainwashing of Norwegian pupils.”

Protesters ranging from elderly in wheelchairs to young school children streamed into Youngstorget Square wearing colourful raincoats and carrying Norwegian flags and roses, which have come to represent Norway’s peaceful response to the horrifying attacks.

The culture ministers of the Nordic countries were also at the square to participate, while other similar events were to take place across Norway.

Norwegian Culture Minister Anniken Huitfeldt admitted she had wept as Nilsen led the chorus and the crowd sang along, waving roses in the air.

Afterwards they walked slowly together, still singing the song, to the courthouse to add their roses to the piles of flowers already lining the security barriers outside in memory of Breivik’s victims.

The song is an adaptation of US folk singer Pete Seeger’s “My Rainbow Race” and is very popular in the Scandinavian country. Its chorus goes: “Together, we will live, each sister and each brother, small children of the rainbow and a green earth.”

“The song has never been so beautiful before,” said Lill Hjoennevaag, who was one of people who started a Facebook campaign last Friday in reaction to Breivik’s comments about Nilsen’s song, calling on the public to “reclaim the song” and sing it together near the courthouse. “The turnout was far better than I had expected,” Hjoennevaag told AFP.