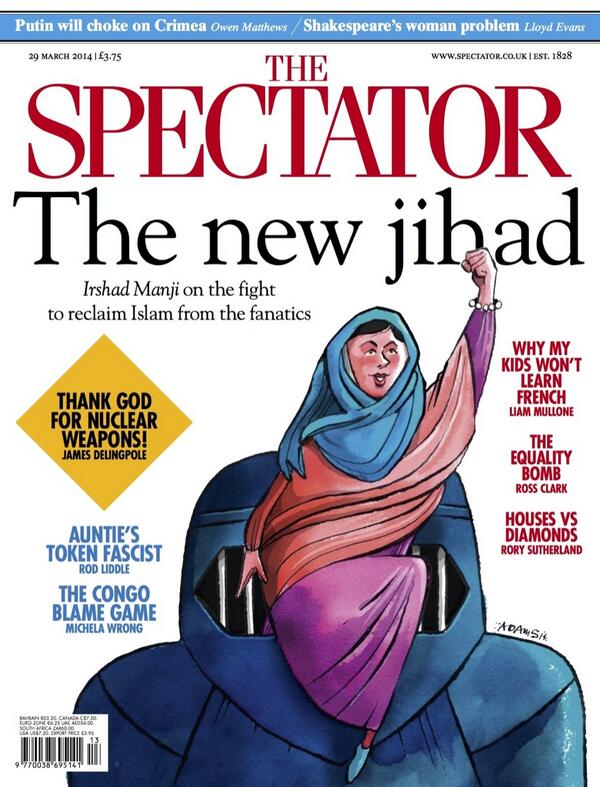 The Spectator devotes the cover of this week’s issue to promoting a Muslim. Unlikely, you might think, until you find out that the Muslim in question is Irshad Manji, much admired by Daniel Pipes, Melanie Phillips and Geoffrey Alderman – not least because of her enthusiastic support for the state of Israel.

Inside the magazine, Manji outlines her views in an article entitled “It’s time to reclaim Islam from the fanatics. Here’s how”. Unsurprisingly, this involves reforming Islam along the lines advocated by unrepresentative individuals such as “my friend Maajid Nawaz” of Quilliam – one of the few Muslims who can reasonably claim to be held in even more contempt within the Muslim community than Manji herself is. She also boasts about posting links to the racist Jyllands Posten cartoons on her website – all in the interests of freedom of expression, you understand.

Manji herself serves an obvious purpose for the anti-Muslim right. They hope to deflect accusations of Islamophobia by pointing to their admiration for and promotion of a well-known Muslim, while enlisting her support for their campaign to demonise the Muslim community and its more representative figures and organisations.

Elsewhere at the Spectator, it’s business as usual. Douglas (“conditions for Muslims in Europe must be made harder across the board”) Murray contributes a blog post attacking “multiculturalism and mass-immigration”.