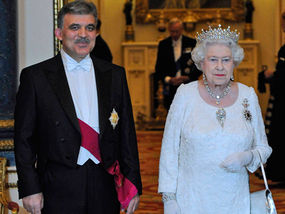 The Queen held a halal state banquet at Buckingham Palace for Turkish President Abdullah Gul tonight and promised British backing for his country’s bid to join the European Union.

She celebrated ever-closer political and economic ties between the two nations, despite concerns over allowing the predominantly Asian and Muslim country into the EU.

“We have come through a great deal together to develop what is, today, a very modern partnership,” she said. “In Europe, the British Government remains committed to working with you to secure your place in the European Union.”

The 85-year-old monarch and 170 British and Turkish guests sat down to a completely halal state banquet of lamb from the royal estate at Windsor in the palace ballroom.

“It’s a matter of politeness that it’s halal. The President and his wife are guests of the Queen. We wouldn’t do a separate menu for them so everyone eats the same,” a palace spokeswoman said.

Meat used at similar banquets for the King of Saudi Arabia in 2007 and the Emir of Qatar last year were also slaughtered in a traditional Islamic way to ensure they too were halal.

The response of Express readers is predictable:

“Here we go again!! Britain bending over backwards to please some Muslim who cant wait to join the E.U. so that his people can come here and claim benefits. Muslims extremists blow us up, Muslims say how much they hate the British people, Muslims insult our brave soldiers, and we go out of our way to support and appease them. I really fear for the generations who will have to live with the consequences of these actions”

“The Quisling…..oops, i mean Queen, is little more than a willing follower of this multi-cultish nonsense who is helping the Islamic world to colonise our land.”

“Halal is cruelty to animals how can this woman be patron of the RSPCA when she actively condones this sort of cruel dogmatic ignorance…. Another sign of British culture and values being eroded by multicultural negligence.”

“legitimate use of halal could be applied to our treasonous political class, absolutely no problem with that”

“We are a CIVILIZED NATION, whose ancestors toiled for centuries to lift us out of barbarism, creating LAWS AGAINST ANIMAL CRUELTY which GUARANTEE the humane slaughter of animals in Britain. We cannot allow the primitive customs of foreigners to drag us back down into savagery…. Isn’t it time we stood up for our nation and our Christian faith? Is the Queen a Christian, following her Coronation Oath as ‘Defender of the Faith’, or not?”

“In my opinion this was shameful and disgusting. No wonder our politicians are treated with such disdain and contempt … If Turkey ever did join Europe there would be war on the streets of Europe and this country is inviting this very real possibility”

“It’s not only illegal halal butchery, but this year Muslims have pressured Sainsbury’s into issuing a letter to all branches, FORBIDDING THEM TO PUT UP EMERALD GREEN CHRISTMAS DECORATIONS to avoid ‘offending Muslims’, WHO CLAIM THIS COLOUR AS THEIR OWN!!! They claim that ONLY MUSLIMS are allowed to use this colour of the Saudi Arabian flag…. Last year, Sainsbury’s was almost the ONLY supermarket bold enough to put up cheerful RED & GREEN traditional Christmas decorations, but this year the Muslims have finally won their insidious ‘Creeping Sharia’ battle to have EMERALD GREEN CHRISTMAS DECORATIONS BANNED FROM BRITISH SHOPS, from Christmas cards, tinsel and Christmas tree decorations.”

Postscript:  The Express report has proved something of an embarrassment to the English Defence League, who had just started a “God Save the Queen” thread on their Facebook page. Still, some EDL supporters are hopeful that Her Maj can be persuaded to see the error of her ways:

Update:  Expose provides evidence that not all EDL supporters are inclined to let the Queen off so lightly. Arthur Disbury denounces her as a “FKN TRAITOR!!” Given that treason is defined as the crime of disloyalty to the Crown, the accusation that the monarch herself is guilty of this offence raises some interesting constitutional issues.