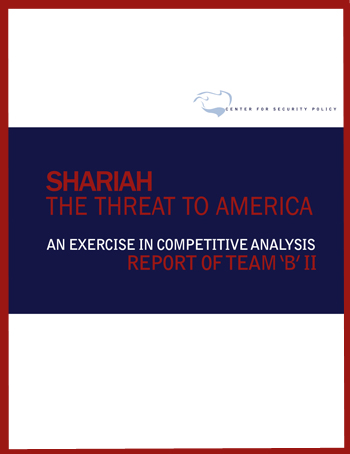 A new report denouncing the threat to the U.S. from sharia, or Islamic law, marks the latest development in a summer filled with intensifying attacks on Islam in the United States.

Several Republican members of Congress endorsed the new Center for Security Policy (CSP) report, “Shariah: The Threat to America“, at a press conference in the U.S. Capitol Wednesday afternoon.

The report proposes the alarming conclusion that many apparently-lawful U.S. Muslims are waging a “stealth jihad” to impose sharia on the U.S. through peaceful means, and that virtually all major Muslim-American organisations are affiliates of the Muslim Brotherhood, the Sunni fundamentalist organisation.

Critics charge that the current alarm over sharia is rooted in paranoia, bigotry, or simple ignorance of Islam. But this school of thought has made increasing inroads into mainstream conservatism in recent months, and Wednesday’s press conference illustrated the ways in which it has captured the ear of prominent Republican politicians.

Rep. Pete Hoekstra, a Michigan Republican who is the influential ranking member of the House intelligence committee, attended the press conference to show his support, as did Rep. Trent Franks, an Arizona Republican. Rep. Michelle Bachmann, the Minnesota Republican who heads the House Tea Party Caucus, also sent a letter in support.

At the conference, CSP president Frank Gaffney warned of Muslim radicals “destroying Western civilisation from within”, aiming to impose sharia through force if possible but through “a more stealthy technique” if necessary.

“If we…convey the idea we are submitting to those who espouse sharia, we are signaling to them that it is now practicable to revert to the more forceful way of achieving their ends,” Gaffney said. He warned that the resultant attempt “to impose sharia upon us through force” could make the Sep. 11 attacks “look like a day at the beach”.

Suggesting that sharia is “the preeminent totalitarian threat of our time”, the report offers far-reaching – and to critics, draconian – proposals for how to combat it.

These include banning Muslims who “espouse or support” sharia “from holding positions of trust in federal, state, or local governments or the armed forces of the United States”. The report similarly recommends prosecuting those who espouse sharia for sedition, and banning immigration to the U.S. by those who adhere to sharia.

And Paul Woodward, “The advance of the anti-Muslim movement across America”, Mondoweiss, 17 September 2010