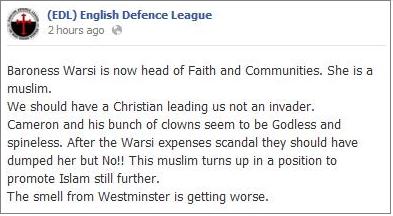 Unsurprisingly, the far right were very pleased to hear yesterday that David Cameron had succumbed to right-wing pressure and removed Sayeeda Warsi from her post as Tory party co-chairman. The subsequent news that Warsi had been appointed Faith and Communities minister was less well received.

We have already drawn attention to the English Defence League’s response to Warsi’s appointment (see above). However, it’s also worth checking out the comments that followed this official post on the EDL’s Facebook page.

(Bear in mind that at least one of the comments has been removed by the EDL admin, because as an EDL member observes “the left and all the mugs love screen shotting that shit and they use it against us”. What is left presumably is the stuff that the EDL has no objection to appearing in the public domain.)

Along with personal attacks on Warsi herself, including “Fuck Islam, Fuck Warsi”, “Corrupt moslem bitch!” and “TWO-FACED RAT!”, there are more generalised anti-Muslim comments such as “chuck the fuckers out i hate them england is our country. fuck off back to pakistan”.

The political establishment is denounced: “We have already been invaded, moslems are set to take over Western Europe without a shot being fired, due to the the appeasement of Islam by the Dhimmi cowardly politicians!”

And one comment features a threat against Cameron in particular: “I know if i ever met the wanker priminster regardless what the shit pigs would do id still smack him to the ground and make him see what he’s really doing. Fucking makes me sick seeing the dirty cunts live here and live of our money!! & trying to take over what is rightfully ours!!!”

We also find calls for wider political violence. One EDL supporter predicts that “there will be a backlash soon in this country that will see 1000’s killed unless things change now”, while another proposes the following course of action:

“it’s time to start a reveloution in this country get cameron and all the other traitors, all the islamic muslims out of britain n send em to afghan back to their smelly shitholes of a country, fuck islam forever rot you fuckers rot in your own shit n piss, i fucking hate your faith with all my heart n sole you SCUM”.

A recent piece at Left Futures played down the idea of the EDL as a movement of the far right, quoting Nigel Copsey’s statement (from his Faith Matters pamphlet) that “unlike the BNP (or the NF), the EDL is not driven by a fascist or neo-fascist ideological end-goal”. That is true mainly in the sense that the EDL has no formal political programme and therefore lacks an official end-goal of any sort.

However, as the EDL comments on Warsi demonstrate, in practice this is a movement that indulges in rhetoric no less extreme than anything you might find on an NF or BNP website and openly promotes an identifiably fascist vision of a reborn nation purged of Muslims and the traitor politicians who appease them.