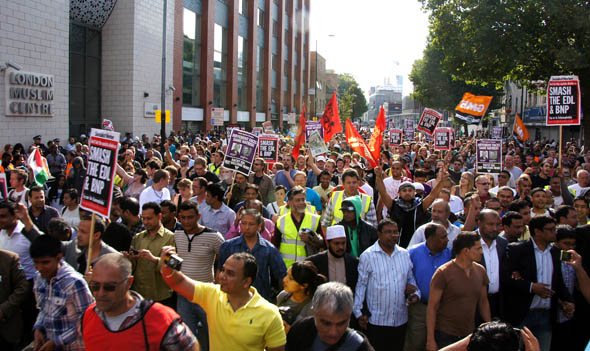 By any standards, the English Defence League’s attempt to hold an intimidatory protest against the Muslim community of Tower Hamlets on Saturday was a failure.

The state ban on the EDL’s march, which reduced them to holding a static demonstration instead, not only dissuaded some of their supporters from attending the protest (a number of divisions complained that they had been unable to fill the coaches they had hired) but also created considerable logistical problems for the EDL leadership. The RMT’s threat to close down Liverpool Street station if the EDL gathered there, and the announcement by pubs in Camden that they would refuse to host the EDL, left Stephen Lennon and Kevin Carroll scrabbling around for a place to assemble their troops before entering the East End for the planned rally.

As it turned out, the EDL didn’t even get into Tower Hamlets anyway. The police penned them in at Aldgate, in the City of London, just short of the borough border. With the local community and its supporters having mobilised en masse against the EDL, the police no doubt reasoned that an attempt to hold an EDL rally in Tower Hamlets itself would have resulted in serious public disorder.

Will this humiliation cause a major crisis in the EDL? Not immediately, I regret to say. Although some of its opponents estimated that no more than 700 participated in the protest, photographs indicate that the real figure was more like 1,000. And the EDL is adept at exaggerating attendance at its events in order to counter disappointment and demoralisation. Casuals United, for example, have hailed the demonstration as a “massive success”, claiming that it attracted “over 2,000” EDL supporters.

But it is difficult to see how travelling long distances to get penned in by the police, instead of strutting through the streets shouting racist abuse at the local Muslim population, will continue to have a long-term appeal for the thuggish Islamophobes who make up the core of the EDL’s active supporters. Particularly so, when these protests have no discernible impact on what the EDL claims is the “Islamisation” of the UK. Rather than an immediate collapse, the EDL faces the more likely prospect of a slow decline in support for its protests and eventual disintegration.

The EDL is also threatened by internal disputes. Stephen Lennon addressed Saturday’s rally in breach of his bail conditions, having arrived disguised as a rabbi – arm-in-arm with Roberta Moore, the former leader of the EDL’s Jewish division. Yet only last week Hel Gower, the head of the EDL’s admin team, set up a new Jewish Division Facebook page, while an article on the EDL website denounced Moore for allying Jdiv with extremists and stated that she had been replaced as leader by James Cohen (who won a name for himself within the “counter-jihad” movement as head of the Canadian section of Lars Hedegaard‘s International Free Press Society). Gower declared that Moore was “not welcome in the EDL” and even threatened that she would be “removed from the area” if she turned up at the Tower Hamlets demo. The Gower-Moore conflict will presumably rumble on, with potentially disruptive consequences for the functioning of the EDL.

The EDL leadership are therefore faced with the considerable challenge of maintaining their organisation’s focus and unity. No doubt this explains Lennon’s decision to provocatively defy his bail conditions on Saturday and invite the police to arrest him. As he stated in his speech at the London rally: “I’m meant to sign on at a police station on a Saturday. I’m not doing that. I’m not allowed to go to a demonstration. I’m not doing that. The credible outcome is I will be put on remand in prison for my democratic right. That’s what’s going to happen and when I go to court if they let me out of court with any bail conditions that restrict my democratic right to oppose militant Islam, I will break them the minute I walk out.”

Predictably, Lennon was arrested and hauled up in front of Luton Magistrates’ Court, where he was remanded in custody yesterday, and he is now on hunger strike, claiming to be a “political prisoner of the state”. The EDL asserts that Lennon is being “held captive” because he has “dared to challenge the government’s view that we should engage with, appease, and even fund militant Islam”. Tomorrow they will be holding a protest outside HMP Bedford where he is held, and they plan to organise a series of “flash demos” throughout the UK demanding his release. Presumably Lennon calculates that by providing the movement with a “martyr” it can rally around, he will be able to deflect attention from the EDL’s lack of an effective strategy and paper over the cracks in the organisation.

He has also decided to inspire the troops by stepping up the violent rhetoric. The always fraudulent claim that the EDL is merely protesting against “Islamic extremism” and has nothing against the British Muslim community as a whole has now been ditched. Lennon concluded Saturday’s speech with the following threat:

If the entire Muslim community of the UK is to be held responsible for the violent actions of a tiny minority, then many EDL supporters will see little point in waiting for another 7/7 before they exact their revenge. In the coming period we can expect to see an escalation of EDL-inspired attacks on mosques and Islamic centres, following on from those at Redbridge, Shotton and elsewhere this year. It’s about time that Scotland Yard’s National Co-ordinator for Domestic Extremism abandons his absurd view that the EDL are “not extreme right wing as a group” and takes effective action to defend Muslim communities against them.