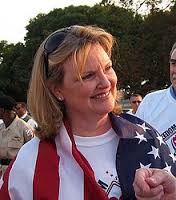 Just weeks before the museum’s opening, tensions are rising over a video to be included in the exhibit, denials of media requests, and a board member’s allegedly anti-Muslim sentiments, Dean Obeidallah reports.

The National September 11 Memorial Museum board member in question is Debra Burlingame (pictured), who is the sister of Charles Burlingame, the pilot of the American Airlines flight that crashed into the Pentagon on 9/11.

My research found that her past comments about Islam have been troubling, to say the least. In 2010, she issued a press release denouncing President Obama’s support of the “Ground Zero Mosque.” That place of worship, she claimed, would spread Sharia law across the United States, leading to the “subjugation of all free people, including secular Muslims who come to this country fleeing that medieval ideology, which destroys lives and crushes the human spirit.”

Burlingame also recently wrote a letter attacking the Liam Neeson film Non-Stop because the hijacker in the film is a military combat veteran and “worse, the flight’s quiet hero who comes to the aid of the protagonist, thereby saving the day, is a Muslim doctor.”

These are just a small sample of the type of statements Burlingame has made.

And courtesy of CAIR, here are some of Debra Burlingame’s tweets: 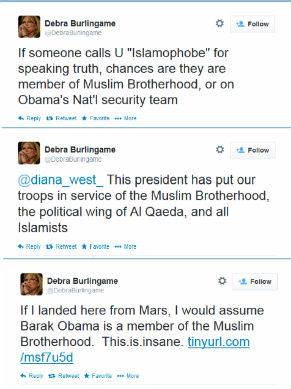