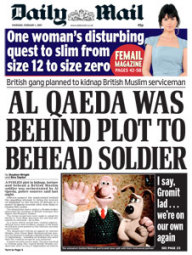 One day after the nine terror arrests in the Birmingham area, the local communities have been assessing the impact of the police operation. Some claim the arrests and the vast amount of media coverage are likely to cause lasting damage to community relations.

And see also the piece by former Guantánamo prisoner Moazzam Begg, who points out that the sensationalist reporting of an alleged terror plot in Birmingham plays on popular prejudice – and puts any possibility of justice at risk.