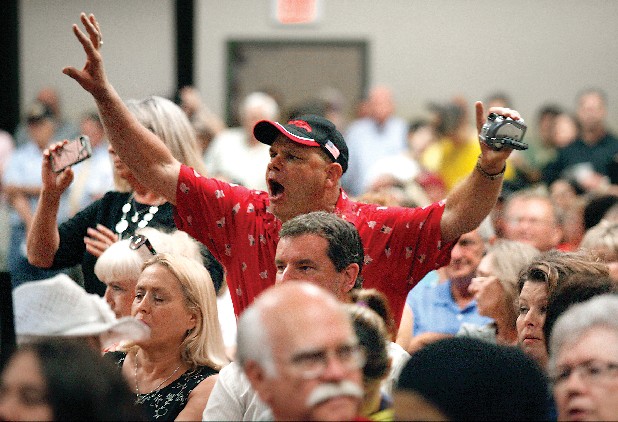 Hundreds of people turned out at the Manchester Convention Center Tuesday evening for an event billed as a discussion of public discourse in a diverse society, with a particular focus on the Muslim religion.

People were turned away at the door because the facility was too full. Some grew angry and started hurling terms such as “communist,” “socialist” and “Muslim” at law enforcement officials.

The indoor event, sponsored by the American Muslim Advisory Council, was countered by a large group of protesters, both outside and inside the facility. Some who made it in before admission was cut off continuously interrupted the speakers. The interruptions were so intense at times that attendee Elaine Smith, 55, of Bedford County, said she was afraid of other audience members.

“I came here because I wanted to learn something … but I couldn’t hear because the audience was so disrespectful,” she said. “I cried when I got here. It makes me really sad especially because these people say they’re Christians. The God I worship doesn’t teach hate.”

During the keynote speech given by Bill Killian, U.S. Attorney of the Eastern District of Tennessee, audience members continually interrupted, making it difficult to understand what was said. Killian brought a PowerPoint presentation that covered the First and 14th amendments and what constitutes a hate crime, among other things. He read the First Amendment verbatim, between interruptions.

Kenneth Moore, FBI special agent in charge of the Eastern Tennessee District, took the podium after Killian.“Our presence here tonight has generated some controversy,” he said. “People think we want to step on and stifle their First Amendment rights. Nothing could be further from the truth.” Moore said the FBI was continually working to build relationships with worshippers of Islam and other faiths because “they are essential” to keeping the country safe.

Protester Larry McIntosh, 54, of Manchester, said he was skeptical of Killian and Moore. “I feel like (these) men are attempting to intimidate people with the freedom of speech and that bothers me,” he said. “I would like to say that Muslims have a right to live here and worship freely, but I do not think they have the right to change American law to fit Sharia law. Violence no matter where it comes from bothers me.”

Former “Saturday Night Live” star Victoria Jackson was among the protesters. “The Constitution and Sharia cannot coexist,” she said. “Islam is evil.”

Event organizers said they chose Manchester and Coffee County because of a Facebook post made by Coffee County Commissioner Barry West last month that said Muslims were best greeted behind a shotgun barrel. West later apologized for the post, but it has since ignited a First Amendment debate.

Gene Policinski, senior vice president and executive director of the First Amendment Center, a nonprofit educational initiative with offices on Vanderbilt campus and in Washington, said the First Amendment does not restrict the right of a public official to express opinions.

“Are public officials held to a higher standard than you or I? I think yes, but it’s not a limitation,” he said. “There’s nothing in the First Amendment banning anyone to say things that people find repellant, distasteful, repugnant or even bigoted. The antidote that our founders provided for speech is more speech, not less.”