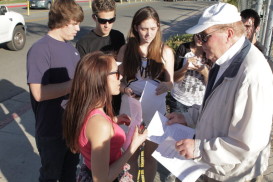 With a vote on a mosque plan days away, an opposition group handed out fliers at a school today. About five people attended the event that began at 2:30 p.m. outside the gates of Chaparral High School on Winchester and Nicolas roads.

The group handed out fliers by an anonymous author who opposed the proposed mosque. “I am opposed to the mosque project at Nicolas road near this school; and to the Moslem Student Assn.,” read the flier.

The flier was addressed to students, and it stated their school brainwashed them, and the district leaders and teachers may also be brainwashed. It also implied Muslims were trying to enslave the readers. “Is someone working to remove your First Amendment rights and freedoms, even to make you into a slave?” the letter read.

One member of the group felt the Muslim congregation – numbering less than 200, according to their Imam – was trying to subjugate Temecula residents. “These people came over and dragged Sharia Law with them. Leave your law in your own country,” said Gabe Fazzini, 74 of Murrieta.

He met Mahmoud Harmoush, the leader of the group that submitted the mosque plan to the city, and he didn’t like him because when he asked the Imam what Sharia Law is, the Imam asked what Fazzini thought it was. “I said, ‘You’d better go back to the desert’,” Fazzini recalled of the meeting.

The students were unreceptive to the group’s message. “I think it’s a joke,” said Ryan Toussieng, 18 of Temecula. “I believe they’re very emotionally attached to this issue, but they don’t have the proper information.”