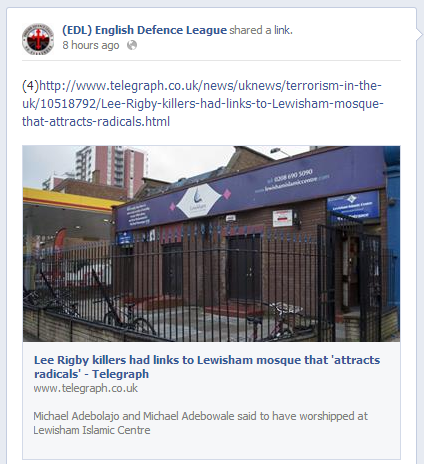 Yesterday saw the jailing of three men for the firebombing of Grimsby Mosque following the murder of Lee Rigby last May. As we pointed out, the arson attack on the mosque was preceded by calls on the Facebook page of the English Defence League’s Grimsby division for the building to be burned down.

Earlier yesterday, in the immediate aftermath of the conviction and sentencing of Lee Rigby’s murderers, the Daily Telegraph saw fit to publish an inflammatory report, based on no evidence at all, that Michael Adebolajo and Michael Adebowale “had links with the Lewisham Islamic Centre in south-east London, less than six miles from the Woolwich street where they murdered the soldier”.

The effect this irresponsible journalism would have on the far right was entirely predictable. The EDL immediately posted a link to the Telegraph report on its Facebook page, resulting in a spate of violent threats by EDL supporters against Lewisham Islamic Centre, a selection of which we reproduce below.