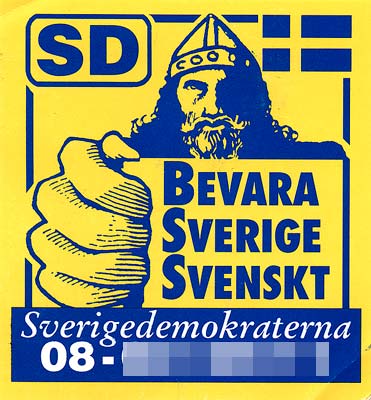 Radio Sweden reports that since the last general election in 2010, when the anti-immigration Sweden Democrats were elected to parliament for the first time, 30 members have been forced to leave the party.

Some of these have been high-profile individuals, such as Erik Almqvist, the MP who came under fire after a video emerged of him engaging in drunken racist abuse. As a result, Almqvist was forced to resign both his parliamentary seat and his party membership – and was then promptly rehired by the Sweden Democrats as a media consultant.

Other Sweden Democrats politicians who embarrassed the party leadership have been treated rather less kindly. Radio Sweden spoke to Lennart Carlström, who was elected as a Sweden Democrats representative to the local council in Härnösand in 2010. He was expelled from the party last year.

Carlström says that he agreed with tough controls over immigration but fell out with the party over his view that migrants already living in Sweden should be treated fairly, along with his rejection of the anti-Muslim hysteria that characterises the Sweden Democrats’ propaganda.

Carlström publicly stated that it he had nothing against children of migrant families receiving lessons in their mother tongue. “Young people shouldn’t lose their language just because they are immigrants,” he explains. “People maybe thought that my views were too liberal on this issue.”

A comment he made about mosques also contributed to his expulsion from the party. “I said that a mosque was just a building,” says Carlström.

If you’re a Sweden Democrats politician you can state that Muslims have no right to practise their faith in your town, or call for Islam to be banned and its adherents deported, and you won’t have a problem with the party leadership. But suggest that a mosque is an ordinary place of worship and you’re out.