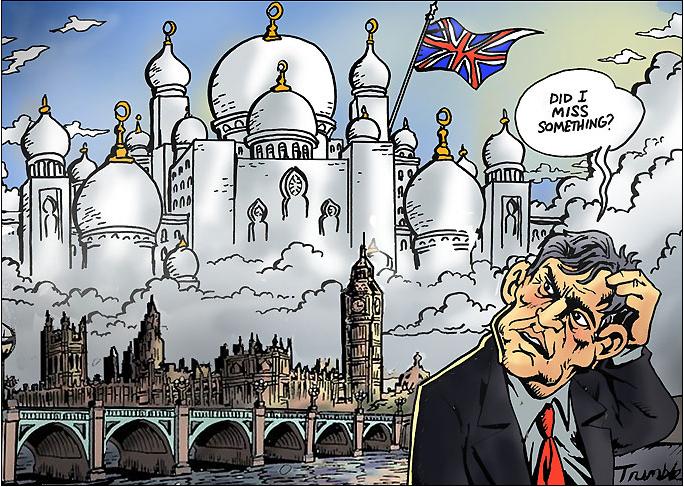 “Britain recently disgraced itself by banning democratically elected Dutch MP Geert Wilders from entering the country. His planned ‘crime’ was to screen a short documentary at a private viewing in the House of Lords…. Our cringing surrender to this authoritarian, book-burning mentality was ordered by mealy-mouthed Home Secretary Jacqui Smith under pressure from Labour peer Lord Ahmed…. Wilders’ visit would have gone unnoticed but for Jackboot Jacqui, whose Government has prostrated itself to accommodate Islam’s nastier fringes….

“It gave oxygen to rabble-rousing imams who brainwashed thousands of young British-born Muslims, not least the 7/7 murderers. It turned a blind eye to migrants who refuse to assimilate and instead colonise whole suburbs and cities where welfare has become a way of life. It encouraged multi-culturalism which, far from spreading tolerance, has entrenched primitive tribal customs, including forced marriages and honour killings. As a result, our security services are at breaking point keeping tabs on an army of shadowy troublemakers who flit back and forth to Pakistan — many to be trained in OUR mass murder.

“… it is impossible to disagree with what Wilders has to say about extremists. He told an American audience recently: The Europe you know is changing. You have seen the landmarks. The Eiffel Tower and Trafalgar Square and Rome’s ancient buildings, the canals of Amsterdam. They are still there. And they still look very much the same as they did a hundred years ago. But a few blocks away from your tourist destination, there is another world very few visitors see.

“Throughout Europe a new reality is rising, entire Muslim neighbourhoods where very few indigenous people reside or are even seen. It’s the world of headscarves, where women walk around in figureless tents, with baby strollers and a group of children. Their husbands – or slaveholders, if you prefer – walk three steps ahead.

“With mosques on many street corners, shops have signs you cannot read. You will be hard-pressed to find any economic activity. These are Muslim ghettos controlled by religious fanatics. These are Muslim neighbourhoods, and they are mushrooming in every city across Europe. These are the building blocks for territorial control of increasingly larger portions of Europe, street by street, neighbourhood by neighbourhood, city by city.

“There are now thousands of mosques throughout Europe. With larger congregations than there are in churches.And in every European city there are plans to build super-mosques that will dwarf every church in the region. Clearly, the signal is: We rule.

“Sounds about right to me.”