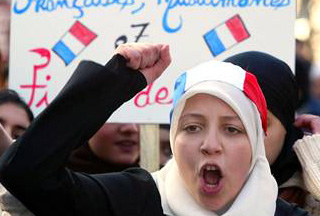 Muslim students have held demonstrations in Paris on the fifth anniversary of the banning of the Muslim headscarf in French schools.

The protesters, mostly Muslim girls with hijab, described the “French law on secularity and conspicuous religious symbols in schools” as racial discrimination saying people should be free to choose their dress code.

The law, which is an amendment to the French Code of Education separating state and religious activities, bans students from wearing religious symbols in schools. France’s national legislature passed the controversial bill and President Jacques Chirac signed it into law on March 15, 2004 and it came into effect on September 2, 2004, at the beginning of the new school year.

Many say the bill contradicts court decisions that had allowed students to wear religious signs, as long as they did not amount to “proselytizing”. Although the law does not mention any particular symbol, it is widely believed that it targets Muslims’ headscarves.