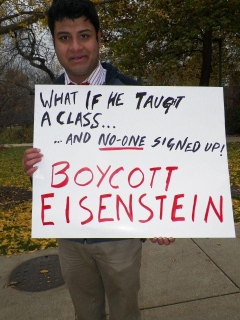 Anti-Muslim comments made by a PUC professor on his public Facebook page and during his class lectures have led to campus-wide outrage and student protests.

Energetic chants such as “No more Eisenstein, Eisenstein must go!” and “They say get back, we say fight back!” echoed throughout the courtyard between the Gyte and SUL buildings on Nov. 9 and 10. Students held signs and handed out transcripts of Eisenstein’s Facebook comments while expressing their opinions as others came and went between classes. Approximately 50 to 70 students took part in the protest.

Associate Professor of Political Science, Maurice Moshe Eisenstein posted comments attached with a link to a YouTube video on his Facebook page on Nov. 6, where he asked for justice for the killings of black Christians in Nigeria while lashing out towards Muslims. The video link was found by another PUC professor, which then started a heated debate between Eisenstein and PUC students via Facebook. On one of Facebook comments, Eisenstein wrote that “Muslims are barbarians and that they are nothing more to me than dogs.”