The hijab should be as welcome as “bangers and mash” in England, a coalition of religious groups and campaigners have said, in an appeal for unity to mark St George’s Day.

Groups including the Muslim Council of Britain and inter-faith organisation the Christian Muslim Forum said the saint has been “hijacked” by groups on the “extreme right”, like the British National Party and the English Defence League, seeking to use him as a “symbol of triumphalism and division”.

“We want to promote a new, relaxed and confident, English national identity,” they said in a declaration. “A place where a hijab is as welcome as bangers and mash, and no-one is attacked for their race, religion – or lack thereof – or any other belief.”

“Although the Crusaders used the Cross of St George, St George actually lived before the birth of Islam and should not be associated with any hatred of Muslims. He is respected by many people in the Middle East because of his origins there.”

The declaration, issued in advance of St George’s Day on Tuesday, said the saint needed to take his “rightful place” as a national symbol of inclusivity “rather than a symbol of hatred.”

“As patron saint for England, St George is there for everyone living in England. Too often he has been hijacked and used as a symbol of triumphalism and division by those on the extreme right. St George needs to take his rightful place as a national symbol of inclusivity rather than a symbol of hatred.”

The signatories to the declaration include the Baptist Union of Great Britain, the City Sikhs Network and the Mosques and Imams National Advisory Board. Other interfaith groups and anti-fascist organisations like Three Faiths Forum, Hope Not Hate and Faith Matters also signed the declaration.

In Brighton yesterday the annual St George’s Day demonstration by March for England drew about 250 racists (or as they prefer to describe themselves, “proud patriots, people who love England and English values”) from a variety of far-right groups. As you can see from the photograph below (via Hope not Hate) they were heavily outnumbered by local anti-fascists. 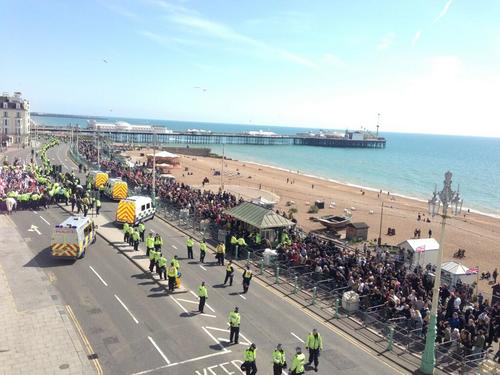