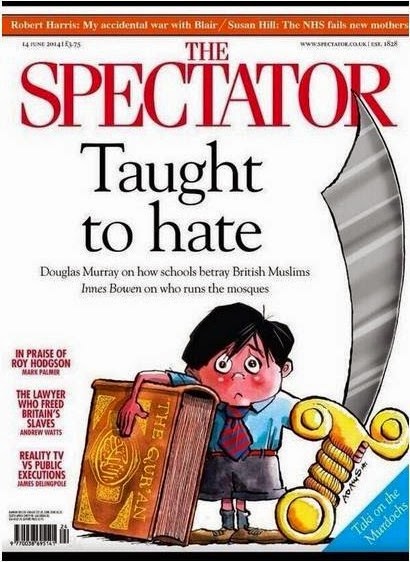 This is the cover to this week’s Spectator. A cartoon of a frightened child clutching the Qur’an in one hand and a scimitar in the other. How could Spectator editor Fraser Nelson possibly have thought that was a good idea?

As you can see, the main article in the magazine is by the raving neocon, Douglas (“conditions for Muslims in Europe must be made harder across the board”) Murray, who Nelson apparently thinks is an entirely appropriate person to lead the Spectator‘s commentary on the so-called “Trojan horse” controversy.

Not only that, but Murray’s piece is followed by an article from Innes Bowen claiming that almost half of British mosques are run by co-thinkers of the Taliban.

The issue also contains an entirely sensible article by Matthew Parris entitled “This ‘Islamist conspiracy’ is WMD all over again”, which argues that the “Trojan horse” affair looks very much like a repetition of the neocon propaganda that provided the justification for the invasion of Iraq. Good for Matthew Parris.

But Fraser Nelson saw fit to bury that article on page 27 and omit any reference at all to it on the cover. He evidently thought it more important to promote a piece calling for support for England football team manager Roy Hodgson.

Here is a response to the Spectator cover by Tory Minister for Faith and Communities Sayeeda Warsi: 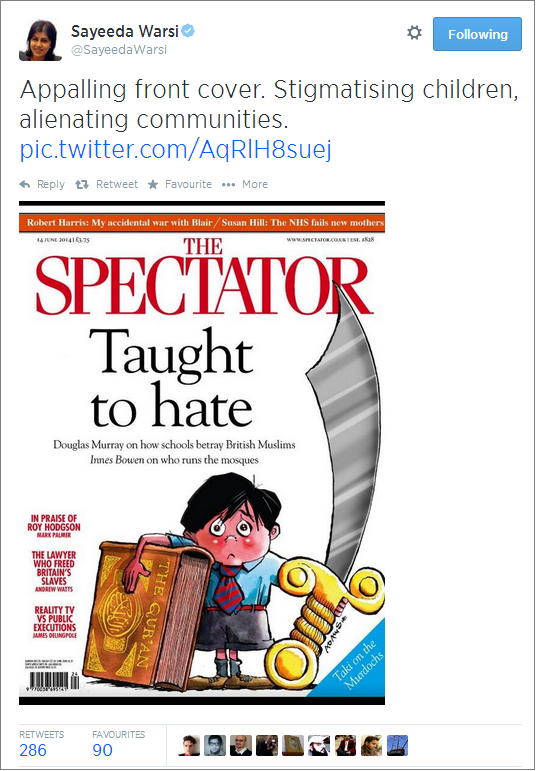