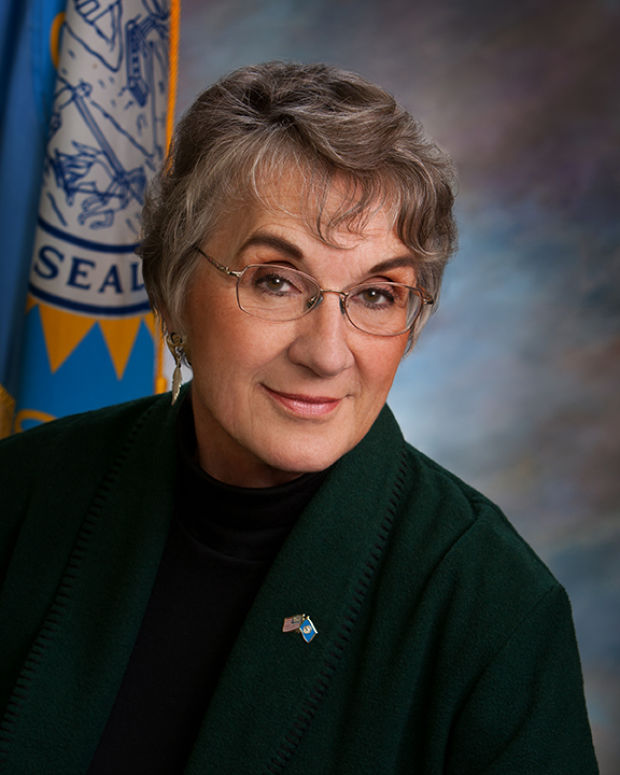 South Dakota state Rep. Betty Olson says she was just trying to be funny when she ended two recent newspaper columns with jokes about Muslim terrorists, 7-11 clerks, Motel 6 managers and the president of the United States.

But her comments went viral across South Dakota and the country this week, with many online comments referring to her as a racist, an ignorant Republican unfit for public office, and an embarrassment to South Dakota.

Her columns, carried in the weekly Butte County Post and online under the header Grand River Roundup, deal with the everyday occurrences of small western South Dakota communities in and around House District 28B, which includes all or part of Butte, Harding and Perkins counties. Topics often include harvest updates, high school football, cattle roundups, rodeos, campfire coffee, parades and the ever-changing weather.

But when she concluded her Sept. 10 column with a made-up warning from ISIS and the Muslim Brotherhood that claimed if the U.S. continued meddling in Middle Eastern hot spots, they would end up cutting off America’s supply of 7-11 and Motel 6 managers, cab drivers, customer service reps for Dell, AT&T and AOL, as well as U.S. presidents, it ignited a viral firestorm and generated innumerable and decidedly unfavorable comments on internet websites and social media.

“You should be ashamed, Betty Olson,” one poster wrote to Talking Points Memo, a national website that published Olson’s remarks. “Once again, the comments you find humorous are racist, degrading and beyond disgusting. Shame on you and all who support your backwoods mentality.”

“I cannot believe, in this day & age, that someone as blatantly racist as you is allowed a public forum to make your sweeping generalizations about groups of people,” an East River South Dakota resident wrote. “Your callous disregard for the office of President of the United States, and your disrespect of a people you obviously know nothing about shows the world your true colors.”

The reaction to her “jokes,” which she said were supplied by friendly contributors, was not confined to the online world. Olson, who has represented District 28B in the state House since 2007, said she returned home Monday night to an answering machine filled with voice messages.

“I was a little surprised when I got some anonymous phone calls when I got home last night,” Olson, of Prairie City, said Tuesday afternoon. “Then I saw it on the Democratic Party website. Apparently, the Democrats didn’t like my joke.”

Olson said the nastiest phone message was from a woman in Wenatchee, Wash., “who said I shouldn’t be in any position of authority because I’m a dumb clod and an ignorant Republican. Then she slammed down the phone. I think she was upset.”

Olson said she was surprised by reaction to her commentary, which she defended this week.

“They saw no humor in my joke,” the 68-year-old legislator said. “My local folks did. I re-posted it on my Facebook page and so far everybody on there has liked it. I do feel bad that so many people don’t have a sense of humor.

Added Olson: “I wasn’t trying to achieve anything. I was just trying to end with a joke like I normally do. Apparently some people didn’t find it funny. As far as being racist, the guy who sent it to me is married to a black lady, so I don’t think racism had anything to do with it.”

Olson, who ran uncontested in the Republican primary for a District 28 state Senate seat, said she faces a strong candidate in the general election for the open Senate seat next month. She faces Democrat Oren Lesmeister, a small-business owner and rancher from Parade.

But she did not believe the latest controversy over her columns would make any difference in the race.

“I doubt it will have any effect at all, because the folks around here aren’t terribly worried about ISIS and the Muslim terrorists,” she said. “That has nothing to do with Western South Dakota.”

But Belle Fourche resident Bill O’Dea, who was following the online chatter about Olson on Tuesday, said he really wished Olson’s comments would sway the outcome of November’s general election away from Olson.

“She covered the gambit,” said O’Dea, who spent 38 years as an educator before retiring as the superintendent of the Belle Fourche School District. “She singled out minority groups and perpetuated stereotypes. It’s inappropriate to do that and to disrespect the office of the President of the United States.”

O’Dea said her comments shed a negative light on the entire state.

“I would characterize her as being uneducated and uninformed about the diversity present in our nation and the world,” he added. “It once again makes South Dakota the laughing stock of the nation. I think it’s embarrassing. Until the majority of our state’s population starts paying attention, uninformed legislators like Betty Olson will continue to be elected.”