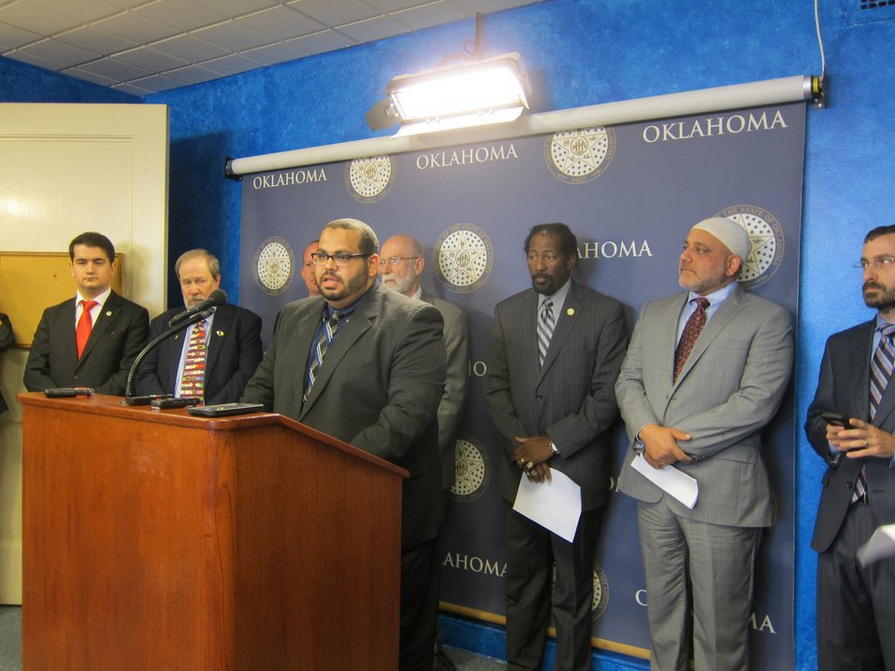 Several social justice groups joined together Wednesday to denounce anti-Muslim comments made by a state legislator – and the leader of one advocacy organization called for the lawmaker’s immediate resignation.

However, state Rep. John Bennett, R-Sallisaw, said he has no intention of resigning. “I stand behind what I said, and I’m sure not going to resign,” Bennett said Wednesday in a phone interview with The Oklahoman.

Last week, the Oklahoma chapter of the Council on American-Islamic Relations criticized Bennett and asked him to apologize for his Facebook post saying people should be wary of those who say they are “Muslim American.”

“Be especially wary if you’re a Christian,” he said in the post, which links to a story about atrocities committed by the Islamic State group known as ISIS. “The Quran clearly states that non-Muslims should be killed.”

At a news conference hosted Wednesday by CAIR-OK, several representatives of local social justice groups and faith organizations also called for Bennett to apologize for his remarks.

Adam Soltani, executive director of CAIR-OK, also said they are asking the national GOP to repudiate Bennett’s remarks and those of state Republican Party Chairman David Weston, who weighed in on the controversy last week. “His track record is clear – he has an agenda of hate and a fear of Islam in our state,” Soltani said of Bennett.

However, Anthony Douglas, president of the Oklahoma chapter of the NAACP, said an apology from Bennett will not go far enough to rectify the matter. Wednesday, Douglas said Bennett should resign because he can no longer effectively represent all of his constituents because of his bigoted remarks.

“He took an oath of office and based on his oath of office, he is a representative 24 hours a day, not just when we go back into legislative session,” Douglas said. “How are you going to be a representative representing your district and yet you put fear in the hearts of your neighbors that live in the district? He can no longer effectively represent the people of his district, based on his statements against the Muslim community.”

The leaders condemned the actions of the Islamic State group known as ISIS before discussing their concerns about Bennett and Weston.

The Rev. William Tabbernee, executive director of the Oklahoma Conference of Churches, apologized to Oklahoma Muslims on behalf of the conference he represents, which is a broad coalition of denominations. He said there are bigots and zealots in most religions, and bigots get caught up in the actions of zealots like ISIS and spread fear through perverting religious scripture to suit their own destructive agendas.

Sheryl Siddiqui, spokeswoman for the Islamic Council of Oklahoma, statewide coalition of mosques, said it was important to note that “Oklahoma Muslims belong to all political parties here, and we vote and we pay taxes and we serve our communities….We’re doing all kinds of work that benefit our communities.”

“I would say to these two leaders, Mr. Weston and Rep. Bennett, if you can’t tell a criminal from a law-abiding citizen, then you have a problem that threatens the safety of every Muslim and every other Oklahoman who is standing next to us in the grocery line, at the library, on the soccer field. God help you,” she said.

Bennett said he has a First Amendment right to say what he wants to say. As far as resigning, he said “my constituents can hire or fire me.” Bennett said he has received hundreds of emails and voice mails from all over the world from people who support him. He said he thinks CAIR-OK is trying to deflect attention away from their organization, which he said has been tied to the terrorist group Hamas.

Wednesday, Weston said CAIR-OK is being “disingenuous” with “the potentially dishonest conversation that they are attempting to have.” “They’ve resorted to name-calling and calling us bigots, and that’s very disingenuous,” he said. “I feel like CAIR is being very thin-skinned in this. We didn’t ask for this firestorm. We’re certainly not trying to pick a fight with Oklahoma Muslims.”