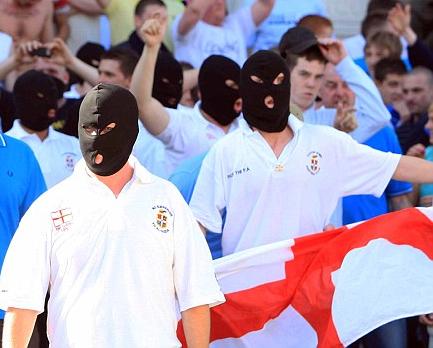 Police are being urged to ban a “sinister” new soccer group – said to include football hooligans – from staging a Midland protest against Muslim extremists.

Casuals United was set up after British soldiers were abused by Islamic radicals at a homecoming parade in Luton earlier this year. The group allegedly includes trouble-makers from soccer clubs across the country, including Aston Villa, Birmingham, Coventry and Wolverhampton Wanderers.

The Casuals have already staged a number of protests against Muslim extremists around the UK, including on July 4 at Birmingham Bullring when a 100-strong crowd was held back by riot police. Now the group are planning to return to the second city for a fresh rally on August 8 – leading to fears of violence.

Last night, Perry Barr MP Khalid Mahmood urged police to block the event. He said: “No matter what these groups say, people have to see that they have sinister intentions and only want to promote violence on our streets. This is the kind of thing we saw in the 1970s when the Far Right came to prominence and caused riots in our cities.”

The Casuals were previously called the United People of Luton, but are said to have switched name to bring in new members from Britain’s football hooligan “firms”. The group, linked to the right wing English, Scottish and Welsh Defence Leagues, are organising themselves on the web, including social networking sites.

They first banded together for a protest in March after Muslim extremists abused 2nd Battallion Royal Anglian soldiers at the Luton homecoming parade. Balaclava-clad thugs were involved in skirmishes with police and racist chanting as they hijacked a peaceful protest by the March for England group. Nine arrests were made.

The Casuals are also said to be planning to target Birmingham airport following unsubstantiated allegations that British soldiers were forced to change their uniforms on the tarmac in case they offended Muslims. But John Morris, head of the airport’s corporate affairs, said: “What has been said about our treatment of the armed forces is lies.”

Meanwhile, over at his Lionheart blog, Paul Ray announces: “I have decided that the way the protests are being led is not in line with how I personally, feel they should be, Because of this, I will not be supporting any upcoming ‘Casuals United’ protests, which includes the Birmingham one on 8th August.”

I ask you, how are the Muslim hordes going to be held at bay if the patriotic forces are divided like this?

Update:  There is now a dispute over who is entitled to use the name of the English Defence League. Chris Renton, the BNP member who set up the EDL website, politely inquires of Ray: “is the name edl yours to take??” To which Ray replies: “Just because you set the website up in your name and address means absolutely nothing.”