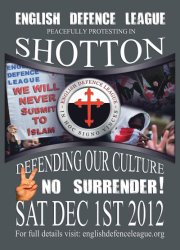 Worried Muslims are expected to flee the village they have made their home when far-right extremists stage a protest tomorrow.

Members of the English Defence League (EDL) are due to hold a demonstration in Shotton Colliery tomorrow from 2pm.

The march is in protest at Durham County Council’s approval of local businessman Kaiser Choudry’s plans to turn the former Melrose Arms pub, in the village’s Front Street, into a Muslim education centre.

Mr Choudry’s nephew, Imran Nadeem, 38, who works in the village’s Milco Store, said: “We are very scared. There has been a Muslim presence in Shotton for at least the last 23 years, there are about five or six families, and we have been a very peaceful community. We will be leaving the area for our safety tomorrow and we are worried about our business.”

The dad-of-one said he is working with his uncle on developing the Muslim centre, which should be open next year and open to all faiths.

Sabby Dhalu from Unite Against Fascism, which is expected to stage a counter-demonstration, warned that previous EDL demonstrations have led to riots, violence, criminal damage and loss of income as workplaces close.