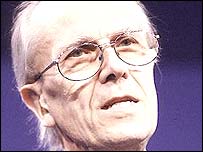 Veteran Tory Lord Tebbit provoked anger among Muslims yesterday by comparing Islamic sharia courts to gangsters. He likened the tribunals to the “system of arbitration of disputes that was run by the Kray brothers”.

The intervention from Lord Tebbit, the former Tory chairman and cabinet minister whose leading role in the Thatcher years has made him a revered figure for many in the party, reignited the row over Islamic courts and their role in the British justice system.

His comparison with the intimidation and violence used by the Krays to run their gangland empire brought an angry response.

Inayat Bunglawala, of the Muslim Council of Britain, said: “We can only wonder whether Lord Tebbit has ever set foot in a sharia council to see what they actually do before making such a baseless and ignorant comparison with the workings of the Kray brothers.

“Both Muslim sharia councils and Orthodox Jewish Beth Din courts exist to try and help resolve civil disputes amongst individuals through a voluntary process of arbitration. They are entirely legal and have to operate firmly within the law.”

You’ll note that the Mail is incapable of reporting such issues without including some baseless reference to Muslim “anger”. So Inayat Bunglawala’s reasoned remarks have to be described as “an angry response”.

Although, to be fair, the Mail did at least make the effort to contact a representative figure from the Muslim community and ask for a comment, which is more than you can say for the Daily Express, the Daily Telegraph and the Sun.