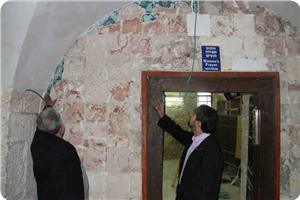 For the second time in two weeks, Israeli settlers stormed the historical Mosque of the Prophet Daud in Jerusalem, and they broke the ceramic and marble tiles covering three walls. The tiles date back to the 17th century.

The incident sparked widespread anger and condemnation amongst those concerned with holy places in Jerusalem, especially that it is not the first time the mosque is attacked. The occupation authorities have already seized the mosque and turned its first floor into a Jewish synagogue.

For its part, a delegation of Al-Aqsa Foundation for endowment and heritage came to the scene to preview the damage, where eyewitnesses told them that the assault took place at night, causing extensive damage and a clear violation to the sanctity of the mosque and Islamic architecture.

The Foundation’s head, Zaki Mohamed Aghbarieh, denounced the attack that came “in light of repeated Israeli attacks on Islamic holy sites in Jerusalem in general, and those surrounding the Al-Aqsa Mosque in particular.”

Aghbarieh considered it as an attack on Islamic architecture especially that the marble that has been broken down dates back to the Ottoman era.

The Foundation called on Arab, Islamic and Palestinian nation to take urgent actions in order to preserve Islamic holy sites in Jerusalem in particular, calling on all concerned parties to save the Islamic heritage and architecture from the Israeli threats.

The Supreme Islamic Council and the Department of Awqaf and Islamic Affairs and Al-Dajani family in Jerusalem confirmed more than once that the mosque and all its surrounding places are all pure Islamic endowments.

It is worth mentioning that the mosque was subjected several times to frequent attacks in order to obliterate its Islamic features, and to turn it into a Talmudic and biblical shrine.