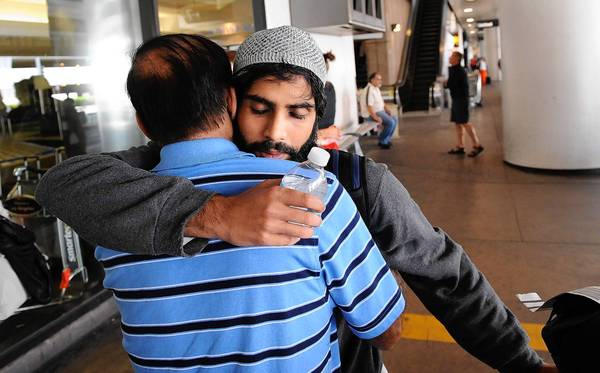 A Southern California medical student is back home after spending nearly two weeks at a Bangkok airport when he says his name turned up on a no-fly list. Rehan Motiwala’s ordeal ended Friday when he was finally granted permission to fly out of Thailand and was greeted at Los Angeles International Airport with hugs from his family, the Los Angeles Times reported.

Motiwala, a 29-year-old U.S. citizen from Pomona, was on his way from Indonesia to Los Angeles when airline staff in Bangkok refused to issue him a boarding pass for his connecting flight. U.S. and Thai authorities told him that he could not travel but didn’t say why, leading him to believe he’d been placed on the U.S. government’s secret no-fly list, the Times said.

After sleeping in the airport terminal for four nights, Motiwala, who is of Pakistani descent, was told that a Justice Department official had arrived from the U.S. to question him. When Motiwala declined to answer questions without a lawyer present, he was left in the custody of Thai authorities, who held him in a detention center for 10 days, he said. “They treat you like an animal,” Motiwala, who was born in Anaheim, told the Times.

Civil rights groups say cases like Motiwala’s show how the government has failed to carry out on a 2010 policy to bring American citizens and permanent residents stuck overseas back to the United States regardless of their no-fly status. “The onus is really on the government to facilitate the return of this person,” Fatima Dadabhoy, an attorney with the Council on American-Islamic Relations in Los Angeles, told the newspaper. “Whether or not they’re on the no-fly list, they can still come home.” The group told the Times it is handling Motiwala’s and at least two other cases of U.S. people from the LA area who have been barred from flying and are stuck abroad.

State and Justice Department officials in Washington would not comment on Motiwala’s status, saying they couldn’t discuss specific cases. The Times says his lawyers believe he may still be on the no-fly list and barred from air travel. They said he had not decided whether to pursue legal action against the government.