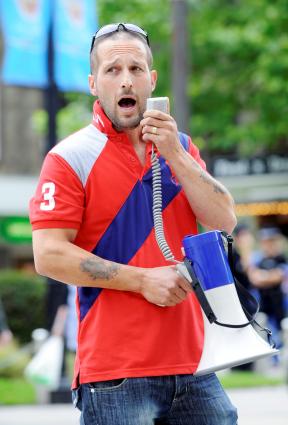 Protestors took to the steps of Bolton Town Hall to rally against plans to build a new mosque in Astley Bridge.

More than 100 campaigners, who insisted they were not representatives of any political party, demonstrated in Victoria Square today.

Plans have been submitted to Bolton Council for a mosque in Blackburn Road with space for more than 1,000 prayer mats by the Taiyabah Islamic Centre.

The protest was organised by Facebook campaign Stop the Astley Bridge Mosque, which has attracted more than 7,100 likes. The group also organised a similar protest at the site of the proposed mosque on Saturday, June 21.

Demonstrators, who chanted “no more mosques”, criticised Bolton Council over a technical fault which has left them unable to submit representation against the plans online.

Michael Birchall, aged 44, from Farnworth said: “They just put mosques up without caring about the local area, and nobody gets a chance to object. Extremist views have been attributed to mosques in the past. I am also concerned about the effect this will have on the community and how it could change.”

David Whittle, aged 46, from Westhoughton, added: “Once there is a mosque there, the Muslims take over that area. It is going to happen in Farnworth next. Anyone can see if this is built parking and traffic is going to be horrendous.”

Tony Burgess, aged 45, from Deane, said the situation in the Middle East played a part in why he was supporting the protest.

Mr Morgan, from Heaton, added: “This is not racist and it is not about making the Muslim community in Bolton feel threatened. This is about showing normal, sensible people do not want their town turned into the sort of place Blackburn has become.

“The plans are for a big, ostentatious building which does not foster community spirit — we would be against it equally if it were a Hindu temple or Catholic church. It is now down to Bolton Council to work out whether they are for or against the democratic process.”

The protest took place on the first day of Ramadan, the ninth month in the Islamic calendar, which sees Muslims engage in fasting during daylight hours.

A passerby, who did not wish to be named, said she had seen Bryn Morgan wearing a British National Party (BNP) rosette at an election count. She added: “People walking past are being frightened into putting their personal details on that petition. The BNP are not wanted here.”

Photos:  (Above) Bryn Morgan of Stop the Astley Bridge Mosque addressing fellow protestors and (below) the “non-racist” Bryn Morgan on a BNP TV programme earlier this year. It was entitled “Whites threatened as Muslims march”.