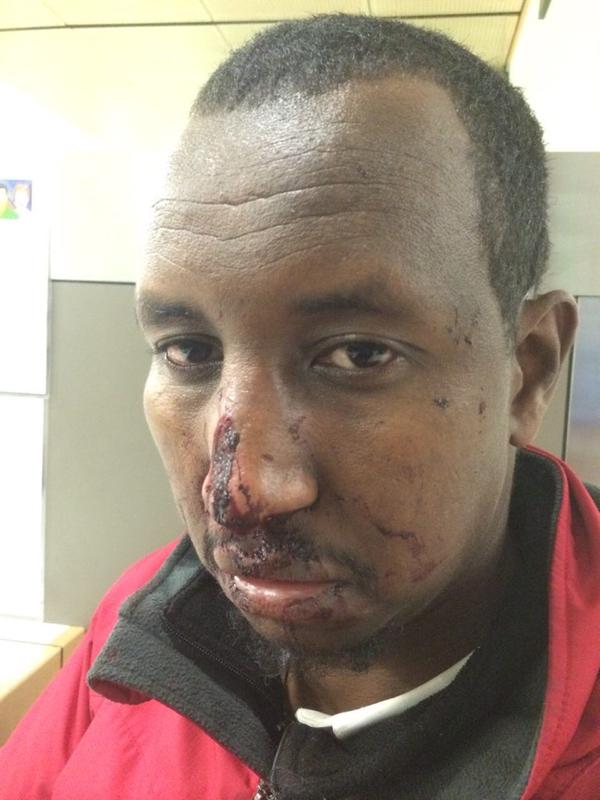 A Seattle cab driver says he was punched repeatedly in the face while driving, causing him to crash into an apartment building, and he says it was because of his religion.

Police arrested his passenger on suspicion of a hate crime, and KIRO 7 found out the suspect may have ties to the military.

Witnesses showed KIRO 7 pictures of Adam Ali Gaal’s bloody face and broken nose taken moments after he says he was attacked. During the brawl Gaal hit two parked cars and crashed into an apartment building in Magnolia after he says 26-year-old Jesse Fleming called him a terrorist.

“Then he said, ‘You are immigrant, you’re not from here, this my country,’” Gaal explained to KIRO 7 outside his Renton apartment building, where he is now recovering.

Gaal says the fight erupted when Fleming gave Gaal his credit card and claimed the transaction was taking too long. “Instead of shutting the door for me, he started punching me,” Gaal told KIRO 7.“He jumped in the front seat next to me and started punching and doesn’t stop.”

Gaal blacked outthat’s how his cab ended up crunched against a staircase. Gaal is Somali and Muslim; he, some of his fellow cab drivers, and Seattle police believe his race and religion may have motivated the attack. KIRO 7 spoke with one of those drivers while he waited for Gaal to be released from the hospital early Sunday morning.

“We are cab drivers who do our job. We contribute to this country; we have nothing to do with terrorism,” Barre Dahir explained.

Gaal says Fleming claimed he was in the military and threatened to shoot him.KIRO 7 checked with the Joint Base Lewis–McChord military base, andit confirmed there is a sailor by that name who lives in Everett.

Yellow Cab confirms the entire ordeal should have been captured on a camera hanging from the rearview mirror of the cab that crashed.Right now only Seattle police have access to that video.KIRO 7 has put in a request for a copy.