Scotland Yard is in negotiations with far right group the English Defence League (EDL) and opposition campaigners amid calls for a ban on next weekend’s planned demonstration. The Met said plans for how to police the march, due to take place next Saturday (September 7) are still in their “formative stages”.

Dozens of community leaders, MPs and faith groups signed a letter to home secretary Theresa May this month calling for a ban on the event. But a Scotland Yard spokesman said: “Some negotiations are ongoing with the organisers, and with those people opposed to it.” A final decision on the demonstration is due to be taken early next week, he added. If the Met decides to ban the march, Scotland Yard must apply to the Home Office for approval.

Even if a ban is enforced, EDL leader Tommy Robinson – whose real name is Stephen Yaxley-Lennon – said on social networking site Twitter that members of the group would still come to the borough next weekend. In a series of tweets directed at Tower Hamlets Mayor Lutfur Rahman, he wrote: “We are coming down your rd (sic). Even if Theresa May bans our march, we are still coming. 65% of the community want us there,” he added.

Anti-fascist campaigners have also pledged to turn out in large numbers next weekend in a counter-demonstration against the EDL. 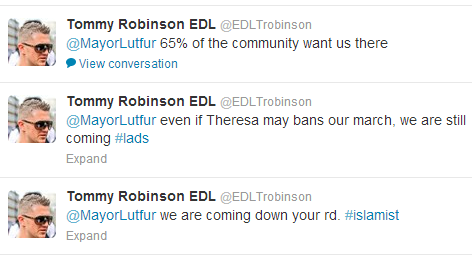