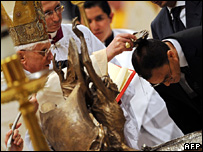 A Muslim scholar involved in high-level dialogue with the Vatican has denounced the Pope’s baptism on Saturday of a prominent Italian Muslim convert.

Aref Ali Nayed, the head of Jordan’s Royal Islamic Strategic Studies Centre, called the baptism of journalist Magdi Allam a deliberate and provocative act. The Vatican has not yet commented, but its official newspaper said the gesture aimed to promote religious freedom.

In a stinging rebuke of Saturday’s televised ceremony, Mr Nayed denounced what he called “the Vatican’s deliberate and provocative act of baptising Allam on such a special occasion and in such a spectacular way”. Mr Nayed said Pope Benedict XVI’s actions came “at a most unfortunate time when sincere Muslims and Catholics are working very hard to mend ruptures between the two communities”.

The Jordanian scholar has been at the forefront of an initiative gathering more than 130 Muslim scholars who recently wrote to the Pope and other Christian leaders calling for greater dialogue and good will between Muslims and Christians.