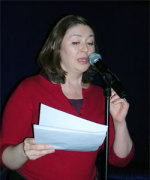 “The fifth annual Peter Tatchell Human Rights Fund meeting was held in London last night despite the pulling out of the guest speaker, the liberal Islamic theologian, Sheikh Dr Muhammad Yusuf due to death threats. Instead the main speaker was the Iranian born secularist Maryam Namazie who claimed that supporters ‘should pay more to hear me speak than some Imam’…. In a vocal attack on the secretary general of the Muslim Council of Britain, Sir Iqbal Sacranie, she said: ‘He may be a “Sir” but he is still a proponent of political Islam, the fascism of today.’ Reacting to public charges of Islamaphobia, she asked: ‘how can it be Islamophobic to say that people should be able to live a 21st century life.’

“Peter Tatchell, making his annual address to supporters of his human rights fund, expressed his disappointment at the absence of Dr Yusuf: ‘I was looking forward to giving a platform to a liberal Islamic cleric. Sheikh Yusuf is afraid of very serious retribution to him and the ones that he loves. The threats came from people who are members of so called moderate, mainstream Muslim organisations. This shows the scale of the threat from even these moderate groups’.”