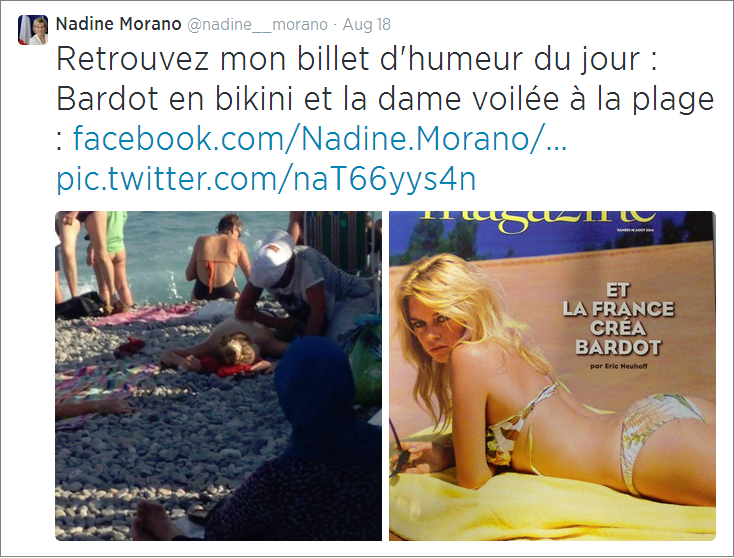 A French MEP and former minister has created a storm in France by posting a picture of a veiled woman sitting on a beach and criticising it as an “attack on our culture”.

Nadine Morano, a close ally of former president Nicolas Sarkozy, took a picture of the woman wearing a headscarf and posted it on her Twitter feed and Facebook page next to a famous photo of sex symbol Brigitte Bardot wearing a bikini.

“When one sees this scene, one cannot but help feel an attack on our culture that goes against our sexual equality,” wrote Morano, from the centre-right UMP party.

“If you choose to come to France, a state of law, a secular state, one should respect our culture and women’s rights. If not, go elsewhere!” said Morano, who is well-known for gaffes and outspoken comments.

She acknowledged, however, that the woman had not broken the law, which bans women from wearing a full-face veil.

The comments touched off a heated debate in France, home to Europe’s largest Muslim community. Abdallah Zekri, president of the National Observatory Against Islamophobia hit back, stressing that “freedom of expression and belief are constitutional rights”.

Morano retorted that France needed a “national observatory for respecting French culture”. “French culture is equality between men and women,” she stressed.

The debate raged on social networks and between politicians.

Jean-Marc Germain, from the ruling Socialists, attacked Morano as representing “the worst of the right-wing … who rejects others, who believes that you are not a proper French person if you are Muslim”.

Valerie Pecresse, from the same UMP party as Morano, reacted by saying: “You can walk around wearing whatever you like on the beach.”

And the deputy president of the far-right National Front, Florian Philippot, repeated his party’s call for a ban on “overt religious symbols” in public.

France’s Secretary of State for European Affairs, Harlem Desir, said he “understood” Morano’s comments, but called for the law to be upheld.

Morano’s elevation of Brigitte Bardot as an emblem of French secularism is particularly telling, given that Bardot is a rabid Islamophobe who backs the Front National and has been convicted of incitement to racial hatred after claiming that Muslims are “destroying our country by imposing their ways”.