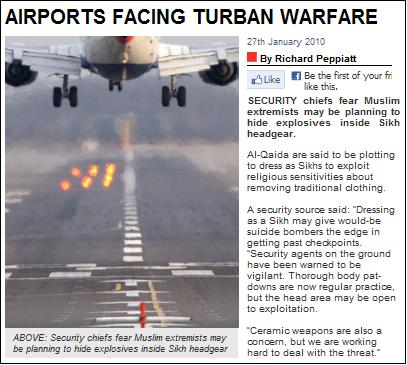 Richard Peppiatt, the Daily Star reporter who resigned in protest at the paper’s methods, notably its boosting of the English Defence League and its incitement of racism and Islamophobia, gave evidence to the Leveson Inquiry today.

You can read his witness statement here. It describes a culture at the Star where “a top down pressure to unearth stories which fitted within a certain narrative (immigrants are taking over, Muslims are a threat to security) led to casual and systemic distortions”.

Peppiatt told the inquiry how he made up a story about a non-existent Muslim bomb plot. He said the inspiration for the story was “a line” from a Sunday Telegraph article which suggested that Muslim terrorists might be thinking of disguising themselves as Sikhs and hiding bombs in their turbans. From the Star‘s standpoint, Peppiatt explained, “having a story that lashed out at both Muslims and Sikhs at once was far too good to pass over”.

He recounted that he phoned the police to ask for confirmation of the report. “They said: ‘Never heard of it, never heard of it all.’ How it should work, is that that kills it – you can go over to your newsdesk and say, ‘Maybe the Sunday Telegraph have got this wrong, I can’t stand this up’ and you move on. Instead what you do is ‘a security source said’ and you make up a quote for a pre-ordained line and then you ring Inderjit Singh and add a veneer of legitimacy by telling them something you know is not true and get a quote.”

Peppiatt’s report was published in the Star under the headline “Airports facing turban warfare“. It began: “Security chiefs fear Muslim extremists may be planning to hide explosives inside Sikh headgear. Al-Qaida are said to be plotting to dress as Sikhs to exploit religious sensitivities about removing traditional clothing. A security source said: ‘Dressing as a Sikh may give would-be suicide bombers the edge in getting past checkpoints’.”

Peppiatt also referred to the notorious “Muslim only loos” report which resulted in a successful complaint against the Star to the Press Complaints Commission. He said he was surprised at this adjudication because the PCC generally does not accept third-party complaints: “It is certainly a massive flaw in the PCC that anyone can’t complain. If you are a Muslim and offended by that story they will say ‘sorry, I don’t see how it affects you directly.’ That’s pretty disgraceful really.”

Peppiatt told the inquiry that another casual reporter working at the paper objected to writing such crude anti-Muslim propaganda, and was consequently bullied out of her job: “She was given every anti-Muslim story to write for about two weeks, so as a result of that she quit. I’m deeply ashamed to this day that I didn’t walk out with her. That’s the atmosphere: you toe the line or you get punished.”

In his witness statement Peppiatt wrote that attempts were made to intimidate him after he decided to go public over his reasons for leaving the paper: “After resigning from the Daily Star I suffered a campaign of harassment and threats to my person, which likely included my phone being hacked. Within hours of the Guardianinforming the Daily Star that they were preparing to publish my resignation letter, the threatening phone calls, text messages and emails began. They ranged from ‘We’re doing a kiss and tell on you’ and ‘Change your voicemail message’ to ‘You’re a marked man until the day you die’ and ‘RD will get ya’ (a reference, I’m certain, to Richard Desmond).”

Peppiatt rejected the Star‘s statement, issued in response to his resignation letter, that the paper’s “editorial policy does not hold any negativity towards Islam”. For the Star to claim it isn’t anti-Muslim, he said, was “like being presented with an apple and swearing blind it’s a banana”.

Update:  The official transcript of Richard Peppiatt’s evidence to the inquiry is available here.