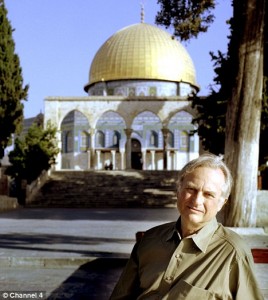 Richard Dawkins claims Muslim schools are having a “pernicious” influence on children who are having their minds “stuffed with alien rubbish” such as claims the world is only 6,000 years old.

The author of The God Delusion, who has previously described religious education provided by faith schools as a form of child abuse, said that the effect was “utterly deplorable” especially as it lasted until their university years. The prominent atheist said he could live with some faith schools that are vaguely religious and saved his fire for the schools that were teaching “total nonsense”.

Mr Dawkins, former Oxford University professor and evolutionary biologist, made his comments as he spoke to the Times Educational Supplement about the launch of a new science book.

He said that while he opposed faith schools as a whole, it was the Muslim ones that worried him the most. “Occasionally, my colleagues lecturing in universities lament having undergraduate students walk out of their classes when they talk about evolution – this is almost entirely Muslims,” he said. “So I think there’s a very, very pernicious influence that is lasting up to the university years. That must be coming from certain schools.”

He said that he noticed the “utterly deplorable” effect they were having first hand after visiting a Muslim school in Leicester as part of a documentary he made last year called Faith Schools Menace? “Every single person I met believes if there is any disagreement between the Koran and science, then the Koran wins,” he said. “I spoke to a group of girls, and to a senior science teacher who believes the world is 6,000 years old. It’s just utterly deplorable. These are now British children who are having their minds stuffed with alien rubbish.”

The pervasive influence attributed to Muslim faith schools by Dawkins would certainly surprise anyone who knows anything about the education system in the UK, given that only a tiny minority of Muslim children are taught in such schools, and if they do attend faith schools these are overwhelmingly Christian ones.

And note Dawkins’ telling use of the word “alien”. No surprise here – this is after all a man who has been happy to reproduce on his website the sickening video rants of anti-Muslim racist Pat Condell. Nor is Dawkins’ portrayal of Muslims as the main threat to education anything new. A few years ago he informed Daily Mail readers that “Islam is importing creationism into this country” through the presence of Muslim pupils in classrooms. Dawkins’ easygoing attitude to Church of England faith schools is hardly unexpected either. Dawkins describes himself as a “cultural Christian”, by which he means a cultural Anglican – although, to be fair, he is also prepared to consider an anti-Islam alliance with Christian fundamentalists.

Update:   Inayat Bunglawala adds: “I think Dawkins may perhaps be getting a bit confused between Muslims and Christian creationists. I have never heard any Muslim say that they believe the world is only 6000 years old – whereas I have seen this claim made by – predominantly American – Christian creationists.”

Update 2:  Still, Dawkins does have his admirers: 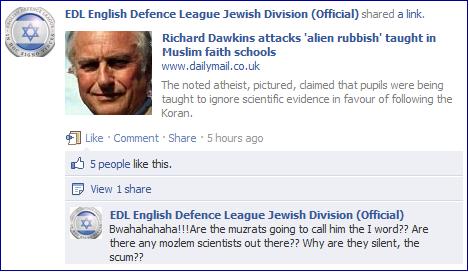