Hundreds of Anti-Islam protestors descended on Lincoln city centre on Saturday. Echo reporter Mark Williams walked with the demonstrators to discover how far they would go to make their point heard…

Amid the odour of cheap booze, protestors of all ages gathered in our historic city. As a 76-year-old woman roared “Muslims go home”, an 11-year-old boy squared up to police officers. Lincoln women, draped in patriotic gear, sang anti-Muslim chants as they pushed prams through the crowds.

The gathering had been organised by the East Anglian Patriots to protest against plans to build a mosque in Boultham Park Road. Yet, at no stage, did any demonstrator offer up to me a worthy argument as to why the mosque should not be built. Instead, the tone in the throng of the crowd was simply anti-Muslim.

There were protestors – men, women and teenagers – who could barely stand up straight because of the huge quantities of alcohol they had consumed earlier. Following an emotional “There’s only one Lee Rigby” song, a man turned to me and, with a puzzled expression and almost incoherent speech, asked: “Who the hell is Lee Rigby?”

And let us not kid ourselves. There were more than enough of these so-called protestors sniffing out every opportunity for a brawl.

One teenager boasted to his mate he was equipped with a knife “in case it all kicked off”. A woman sporting a baseball cap turned to her friends to ask whether they knew of any Pakistanis she could “smack”. As one speaker claimed: “David Cameron calls us racists,” a group of teenagers standing behind me responded with: “But that’s because we are”.

Another woman whispered to her group of friends: “I have just realised my partner’s best friend is a Muslim. “Oh well, he can get lost as well.” One man, also with a baseball cap on, added: “I have just had a great idea – why don’t we go around chopping their heads off as well. That will teach them a lesson.”

The fact is the majority of these people simply didn’t care who they had a conflict with. It was only down to the excellent policing on the day that thwarted any notable violence.

Following a heated confrontation between protestors and members of a Lincoln TUC counter demonstration, a charge at officers in the city’s High Street was soon halted by the force’s dogs.

The march was scheduled to last two hours. But it was so poorly organised, that the group headed back to the pub more than half an hour early.

Police officers’ patience was frequently tested and a number of minor scuffles ensued as demonstrators ran into the road in a ridiculous attempt to stop the traffic. The whole episode smacked of a football away day. Drunken yobs not really knowing where they were going, what was going on, or necessarily what city they were in.

In the George and Dragon pub, marchers were boasting of their criminal records and respective scuffles with officers. There was even a divide in the group late in the day as two protestors were told to get out before they got hurt.

Put simply, the demonstration was disjointed and disorganised. Speakers in City Square promised the next march in Lincoln would see thousands of people bring the city to a standstill. For that to happen, organisers need to be more efficient and protestors need to be less under the influence if there argument is to be taken seriously. 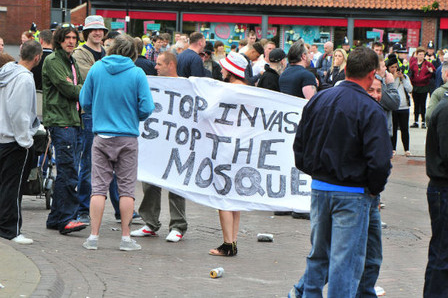