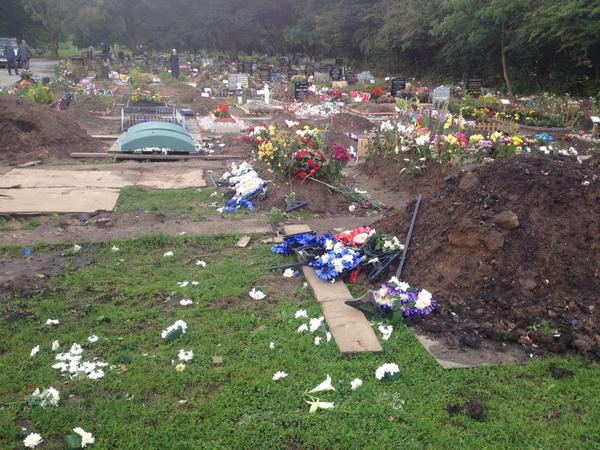 Racist vandals have carried out a sickening attack on Muslim graves in a cemetery.

The yobs uprooted headstones, trampled on flowers and kicked over memorials in what police branded a ‘heinous and senseless’ crime in Chadderton Cemetery.

The raid took place at the site, on Middleton Road, between 8.30pm on Friday, August 15, and 7.30pm the following day.

Officers received a distressed call from someone visiting the grave of a loved one. When police arrived they found up to ten graves – all in the Muslim section of the cemetery – had been damaged, leading them to believe it was a racially-motivated attack.

Wooden grave markers and headstones were uprooted from four adjoining graves, one of which had a brass plaque ripped from the headstone itself.

A further two large floral tributes on other graves were smashed, trampled on and the flowers scattered across the other, while flowers on up to four other graves were also kicked over. There was also some evidence to suggest someone had walked directly over a recent grave. Police are now appealing for witnesses to come forward.

Sgt Jon Martin said: “The exact motive for this heinous and senseless vandalism is unclear, but given that only the Muslim section of the cemetery was targeted it has to be treated as being racially motivated. That makes this vandalism even more sickening, as the culprits have singled out the resting places of those who have lost their lives purely because of their religion. This is not just wanton racism but the deliberate, calculating and cruel act of desecrating the memories of Muslims who are buried at the cemetery.

“The distress this has caused to the families who have loved ones buried here is immeasurable. It is not just the vandalism itself, which can be repaired, but the thought of someone trashing what should be a place of sanctity and tranquillity for those who have lost their lives purely because of their religion. We need to find the culprits, who may very well live the local area, so I am appealing to the community for help in identifying them. If you suspect who may be involved then please call us.

“I would also ask people to search their consciences and if you know who is responsible, do the right thing and call us. How would you feel if it was your loved one’s grave that was vandalised in this way? Think of the anguish you would feel and imagine how the victims are feeling right now. So please, if you do know anything then call us.”

The link to the report on the MEN‘s Facebook page has had to be taken down after abusive comments were posted which, far from expressing any sympathy for the victims of this desecration, denied that the vandalism was racist or claimed that Muslims are allowed to target non-Muslims with impunity.

Here are some examples:

“Poppys and uk flag was burnt n middle of town??? What happened then ????”

“If a Muslim did this to a white mans grave…it wouldent b classed as a racist attack. This country is be comeing a joke.”

“The poppies symbolise OUR soldiers and all who died for OUR country… A grave is a grave… It was vandalism… NOT a rasict attack !!! Get it right… Burning poppies and a UK flag is a rasict attack on our country… End of !!!!”

“Everythings classed as racist if a muslim asian whatever is involved , but when a white british is involved its just nothing really, its the media an these lot who brand everything racist that happens, but let a group of asians attack a white man an its just a attack, let a group or one white person attack a coloured person an all racist hell breaks loose! Wrong so wrong.”

“burning Poppy’s and British flags isn’t racist or us having to take our OWN COUNTRIES FLAG DOWN because it offends the scum.. this country is a joke !!”

“just want to say in birmingham tesco was attacked by muslims, customers were hurt by them and one police man, only one arrest was made and that was for the police man that was hurt, why ? were they allowed to get off with the rest, yes its wrong what happened at the graves but if the police arent going to stand up for the public this is going to happen.”

“Always callin the race card eh friggin idiots what about the burning of the poppies and the uk flag!!!!”

“The muslims having their own section in a british graveyard is racist in itself, all should be buries in one graveyard not seperated by religion, either that or fly the bodys back to where they came from.”