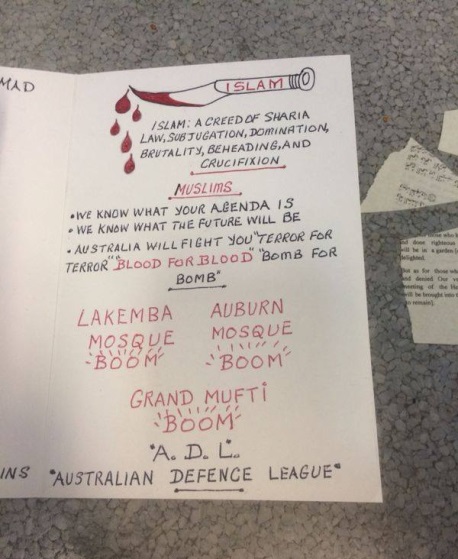 Death threats against the nation’s leading Islamic cleric and threats to bomb Sydney’s two biggest mosques are included in a letter signed by ultra-right-wing racist group the Australian Defence League.

The owner of prominent Muslim clothing store Boutique Nour al Houda in Greenacre, in Sydney’s southwest, said he received the letter about a month ago and reported it to police.

After becoming the target for racially motivated abuse in recent weeks, the store owner – who wanted to be known only as Sal – has removed a collection of large flags, including some displaying the Islamic creed praising Mohammed, the national flags of several Middle Eastern countries and the Australian flag.

“We have a business to run, we don’t need these wankers coming around and telling us they’re going to blow us up, so we took them all down,” Sal said. “Now we are suffering … we live in Australia, one of the best countries in the world, and now we are the targets.”

There have been a string of reported attacks against Muslims in the past two weeks since the nation’s largest terrorism raids, with one woman’s headscarf being ripped off, injuring her neck, and a man entering a school in Sydney’s west armed with a knife. Two weeks ago, a 54-year-old man from Tuggerah Lakes on the NSW central coast was charged over leaving a string of anti-Islamic abusive phone messages at what is believed to be a Lakemba mosque.

Sal said police had visited his store about a month ago but had not returned and he believed “nothing” had been done regarding his complaint. He and many others in the Muslim community saw last month’s raids of 15 homes, involving 800 police officers, as a show of strength by police – however, they felt frustrated that no such show of strength had been taken in response to threats from ADL. “Why are we being targeted? It’s just straight-up racism,” Sal said.

The ADL could not be contacted yesterday.

The group was established in 2009 as a splinter of the English Defence League, a violent British street movement. ADL members have allegedly been involved in stalking and photographing Muslim women on public transport and displaying anti-Muslim posters outside mosques. Despite its name, the organisation is understood to comprise relatively few people, with the names and addresses of key members known to police.

The NSW Police Force said yesterday it was aware of “numerous letters” circulated in recent weeks, but refused to comment when asked whether any of the homes or premises connected to the ADL members had been raided as a result, or how many police officers were involved.

“The NSWPF will not tolerate any acts of intimidation to members of the community and will take action to ensure those responsible are arrested and placed before the courts,” it said.