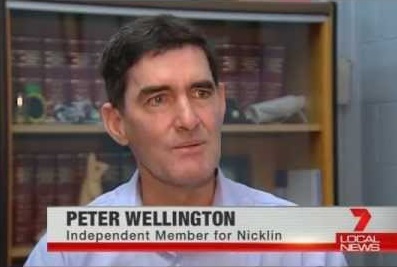 The Queensland government has rejected a push by independents and minor parties to force Muslim women to remove their burqas or veils to prove their identity.

The bill, introduced by the independent MP for Nicklin, Peter Wellington, would have allowed lawyers, police, prison officers, justices of the peace and other “persons of responsibility” to require a person to remove any face covering to establish their identity.

Wellington said the measure was especially necessary in light of the upcoming G20 meeting in Brisbane. “It is not about religion; it is about doing the right thing, about making sure there is security in Queensland,” he said.

He said the bill has “nothing to do with Islam” and cited a 2011 statement from the Australian National Imams’ council permitting Muslim women to prove their identity by removing their veils if ordered to do so by authorities.

The private member’s bill was supported by the independent Gladstone MP, Liz Cunningham, as well as members of the Palmer United party and Katter’s Australia party.

“This bill is about security in Queensland,” KAP’s leader in Queensland, Ray Hopper, said. “When your face is covered up and you have a big overhanging coat or dress on, you do not know whether you are male or female. All you can see are the eyes of someone, and that is a very dangerous situation that the people of Queensland may be facing.”

The state attorney-general, Jarryd Bleijie, declined to support the bill, saying he believed in “a free and democratic society”. “This government believes in a multicultural Queensland. This government respects the rights of its citizens and individuals to practise the religion that they so choose,” he said.

Labor also voted against the bill.

Similar legislation was passed in New South Wales in 2011 after a Sydney woman, Carnita Matthews, used the fact that her identity was obscured by the religious garment to dodge a six-month jail sentence for deliberately making a false statement.

Matthews told police that an officer tried to tear off her burqa when she was pulled over in traffic, a claim that patrol car footage proved was untrue. She successfully argued that because her face was completely covered when she made the false statement there was no way to prove it was her.

Wellington took to Facebook on Thursday to voice his displeasure, saying it “beggars belief” that Bleijie labelled the law as racist, as he was the “architect of VLAD [Queensland’s anti-bikie legislation], the most racist laws ever adopted in this state”.