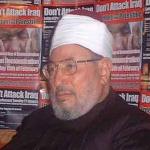 According to Robert Spencer of Jihad Watch, Yusuf al-Qaradawi has taken time out from calling for gay men to be stoned to death in order to urge the murder of Wafa Sultan:

“… now he has directed his rage against Sultan, a fifty-year-old Syrian-American psychologist: ‘She said unbearable, ghastly things that made my hair stand on end’. Specifically, ‘she had the audacity to publicly curse Allah, His Prophet, the Koran, the history of Islam, and the Islamic nation’. He repeated that she ‘leveled accusations against Islam and the Muslims, and cursed Allah, His Prophet, the Islamic nation, the shari’a, and the Islamic faith and culture’. These are serious charges, and Qaradawi states them in terms that his jihadist minions will understand as meaning that she must be killed.”

Even the MEMRI-edited transcript of Qaradawi’s Al-Jazeera broadcast provides no basis for this hysterical nonsense.