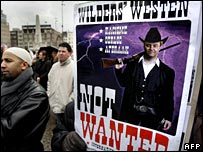 Geert Wilders, leader of the anti-Islam party PVV, will definitely be prosecuted for inciting hatred against Muslims and Islam, news agency ANP writes on Wednesday. A request by Wilders’ lawyer Bram Moscowicz to have the decision to prosecute quashed has been rejected by the Dutch supreme court.

Amsterdam appeal court said in January Wilders should stand trial for hate speech and discrimination. The public prosecution department had said earlier there were not sufficient grounds to prosecute the MP.

The anti-immigration MP said he expected “a political trial”. “I am being prosecuted for something millions of Dutch people are thinking… Freedom of speech is being sacrificed on the altar of islam. But I am ready to fight back with my head held high”, he added.