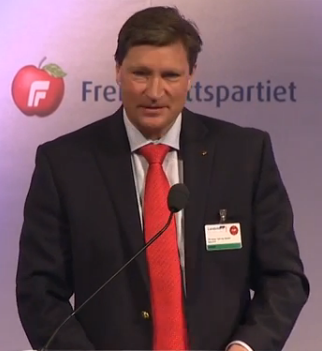 One of the Progress Party’s most controversial figures has warned that Norway’s immigration policy threatens to destroy the country’s culture, putting the party’s coalition negotiations under new strain.

Christian Tybring-Gjedde [pictured], who heads the party in Oslo, refused to renounce the phrase “creeping Islamization”, which was used by party leader Siv Jensen in 2009. “Creeping or not, it is Islamization that I totally renounce,” Tybring-Gjedde said. “If it is the phrase ‘creeping islamisation’ that they do not like, we can call it ‘adaptation to Islamic culture based on Sharia law.’ Maybe those are words that will make it more acceptable for the Christian Democrats to  talk to us.”

The statements, which came after the party has strongly lobbied foreign media not to describe it as anti-immigrant, anti-Islam or populist, provoked an immediate response from the Christian Democrats and the Liberal Party, which are in coalition negotiations with Progress over forming the next government.

“It is sad that Tybring-Gjedde still uses such words and leaves Progress mired in such rhetoric, after deputy leader Ketil Solvik-Olsen tried to clean up this mess,”  the party’s immigration spokesman Geir Bekkevold told Aftenposten.

He said that the rhetoric would make it difficult for the Christian Democrats to enter a coalition with Progress. “When I see statements such as today’s, I see that there is a huge distance,” he said.

Meanwhile Abid Raja from the Liberal Party, which is also part of the the coalition talks, said that Tybring-Gjedde’s statement backed up his claim in a 2006 article that many Progress Party politicians were “steeped in hatred for immigrants, foreigners and refugees”. “Some are simply crazy racists. It’s time to call a spade a spade,” he wrote. The problem, he said, was that Progress Party moderates, such as Solvik-Olsen share the party with extreme figures such as Tybring-Gjedde.