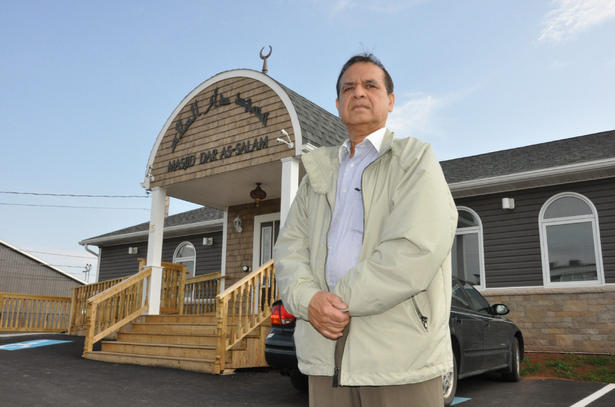 Najam Chishti of the Muslim Society of P.E.I. outside the Masjid Dar As-Salam mosque

Zain Esseghaier has been a Charlottetown resident for the last 33 years, married an islander and raised a family here. Though his modest two-story mosque has been the target of three serious threats over the past year – last week a bottle of gasoline was left at the entrance and the structure plastered with “Defeat Jihad” posters – he remains steadfast, refusing to be intimidated.

“This was getting too close for comfort,” said Esseghaier. “That’s a threat. I spent a good part of my life here. This is home for me. No one is going to force me to leave. We are determined to continue. We are not going to let this threat stop us from what we’re doing. There is no doubt about that in my mind.”

Four years ago, the native of Tunisia and his fellow Muslim Society of P.E.I. members set about finally acquiring their own place of worship. A cross-country fundraising campaign raised about $500,000, enough to purchase a plot of land in an industrial park and build Masjid Dar As-Salam mosque.

Last October, two days after a community celebration to mark the official groundbreaking at the site, a pig’s head was left nailed to a post on the property. Just over a month ago, a contractor’s truck parked near the mosque overnight was set ablaze.

The incidents were reported but the society decided not to go public to avoid adding fuel to the fire. But the latest threat was too serious to keep under wraps, Esseghaier said. He now fears for the safety of worshippers. “Of course, you’re rattled at first,” he said. “You wonder what will be the next step? Will someone throw a Molotov cocktail through the window while someone is worshipping?”

Of the 120 people who frequent the mosque, 90 still showed up for Friday afternoon’s jummah. Most believe a few ignorant, fearful people are to blame and are not representative of the community. “You look around and you say most people are good people and this is the exception to the rule,” said Esseghaier. “We’ll deal with it as an isolated case, even though it’s the third time. It doesn’t represent the values of the people in this province.”

In all, P.E.I. boasts roughly 500 Muslim residents, most of whom live in Charlottetown and pray together. Before having their own mosque, they would worship wherever they could find the space, from a temporary basement mosque to gymnasiums to university classrooms. Building the mosque was a way of retaining the province’s Muslim population, said the society’s president Najam Chishti.

The retired chemist, a native of Pakistan, has lived in Charlottetown since 1979 and he and his wife have raised three children here. He’s at a loss to understand why people would attack his religion. “We just want to ask, ‘What have we done that would warrant this? What are they are afraid of?'”