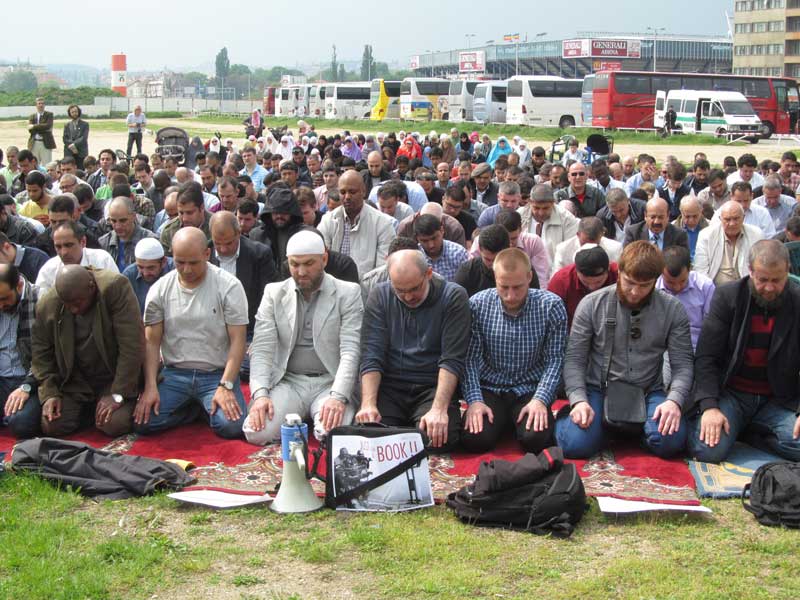 With prayer mats spread on the ground behind the Ministry of the Interior, hundreds of kneeling Muslims gathered today to protest last Friday’s police mosque raid.

About 300 men and several dozen women prayed, listened to speeches and made religious chants in a show of defiance against what a community leader described as an “entirely inappropriate” raid by officials.

There was a small anti-Muslim counter-protest in the area behind the Prague 7 ministry where the prayer gathering – Friday is the most important day of worship for Muslims – was held.

The action by the Czech Republic’s Muslim community comes after a raid by police on Friday last week of a mosque and of the headquarters of the Islamic Foundation. Officers detained a 55-year-old Czech citizen accused of organizing the translation of a book that, according to police, spreads racism, anti-Semitism and xenophobia. Dozens of people were held at the mosque when the raid took place during Friday prayers.

Muneeb Al Rawi, chairman of the Union of Muslim Communities in the Czech Republic (ÚMO), today told The Prague Post the action by the police’s Unit for Combating Organized Crime (ÚOOZ) was inappropriate.

“We would like to express our indignation with the way the intervention [was carried out], for the time, the place,” he said. He described the way the raid was carried out as “entirely inappropriate” and “utterly uneducated.” “I would say we’re being victimized because it wasn’t necessary, because always we’re not preventing … authorities in carrying out their acts and duties,” he said.

He said the authorities should explain why the raid took place and “why it happened in this form” and said “”all legal means” would be used to ensure the “very unpleasant case” was examined. “We warn against the rise of extremism and anti-Muslim sentiment that such behavior may cause and we are concerned about the wave of Islamophobic comments which appeared after the police intervention,” he said.

And “Czech churches critical of raids against Muslims”, Associated Press, 2 May 2014