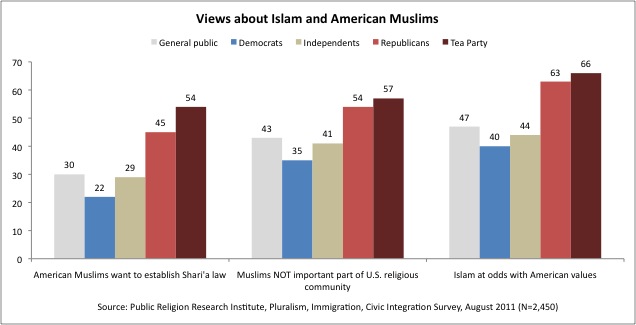 A comprehensive new report by the Public Religion Research Institute (PRRI) and the Brookings Institution reveals a deeply divided American public when it comes to Islam and the place of Muslims in the United States. The survey – “What it means to be American: Attitudes in an increasingly diverse America ten years after 9/11” – shows that “Americans are struggling to reconcile principles of religious liberty and the inclusion of new groups in America with specific discomfort and fears, particularly around American Muslims and Islam,” says Robert P. Jones, CEO of PRRI.

Some 47 percent of all Americans, according to the poll, believe that the values of Islam are at odds with American values and way of life. And the splits along ideological lines reveal a deeply divided public. Large majorities of Republicans (63 percent) and people who identify with the Tea Party (66 percent) say that Islamic values are in contrast with American values. At the same time, however, a majority of Democrats (55 percent) and independents (53 percent) disagree with that view.