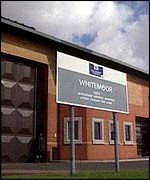 Muslim gangs have created no-go areas for warders in a British jail. Guards claim the Islamic mobs are “a law unto themselves”. And prison staff have passed a vote of no confidence in their governor. MP Malcolm Moss, 65, said Whitemoor Prison, Cambs, was descending into turmoil. He added that staff blamed governor Steve Rodford for pandering to political correctness and making the Muslims untouchable.

The Conservative MP for North East Cambridgeshire warned the unrest had created a “tense” atmosphere not seen since the 90s when the IRA maintained an inner sanctum inside the maximum security prison. He said: “There are no-go sections policed by Muslim inmates, not staff. In the 1990s officers couldn’t do their jobs properly and prisoners did what they like. We may be operating a similar situation.”

A Ministry of Justice spokes-man said: “Ministers receive up-dates on high security prisons and there is no indication of concerns about the management of HMP Whitemoor.”