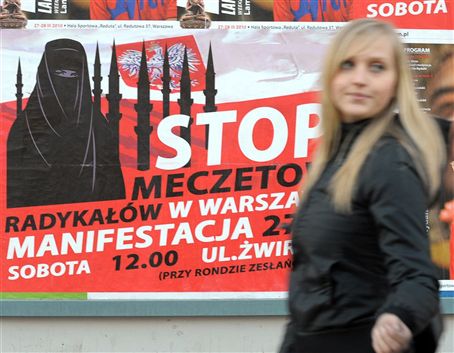 A Polish group calling itself “Europe for the Future” has refashioned a Swiss poster against minarets to demand a halt in the construction of a new mosque in the capital of mainly Catholic Poland.

In the posters, seen in several parts of Warsaw Wednesday, the Swiss flag is replaced with a Polish one and wording that translates into “stop the mosque of the radicals”.

Switzerland voted in a referendum in November to ban the construction of new minarets, a move that drew criticisms worldwide including charges of Islamophobia.

The Polish poster called for a demonstration on Saturday at the site of the mosque and cultural centre under construction near the centre of Warsaw, and described as “radical” the Muslim League of Poland building it.

“The mosque and the centre of Muslim culture are financed by Saudi Arabia, a country which violates human rights and where the mere possession of a Bible constitutes a crime,” the association said.

In a petition addressed to the mayor of Warsaw, the group called for “an immediate halt to the work”.

Muslim League president Samir Ismail said the protests were inspired by individuals who were “sowing hate”.

“It will not be a classic mosque,” he said in the Gazeta Wyborczadaily Wednesday. “It will be a cultural centre open to Muslims and non-Muslims. Arabic courses will be organised there and courses in Polish for children of diplomats.”