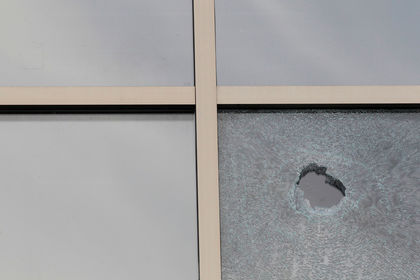 A rock-hurling man smashed windows at a south Ottawa mosque early Friday in an act of vandalism that the vice-president of the mosque suspects is a hate crime.

Surveillance video at the Assunnah Muslims Association mosque recorded the man in a hoodie, shorts and sneakers throwing at least a half-dozen rocks at windows and the glass door of the women’s entrance to the mosque at 4:28 a.m. The stone thrower also shattered a large upper window and damaged the stucco on the west side of the mosque on Hunt Club Road near Bank Street. It’s estimated the vandalism caused more than $10,000 in damage.

Vice-president of the mosque Jalil Marhnouj said the vandal brought his own rocks. “When people came to pray here this morning, they saw the Ottawa police here and they saw the damage,” he said.

The vandalism at the mosque comes a little more than a week after Michael Zehaf-Bibeau shot and killed Cpl. Nathan Cirillo as he guarded the Tomb of the Unknown Soldier at the National War Memorial on Oct. 22. Zehaf-Bibeau then made his way to the Centre Block of the Parliament buildings, where he shot and wounded a guard before being shot and killed himself.

A man who attended the mosque was later stopped on Oct. 25 by police as part of a national security investigation. Officials at the mosque said Luqman Abdunnur upset other members of the congregation when he stood up after a sermon on Oct. 24 and praised Zehaf-Bibeau as a martyr.

There is no evidence the vandalism at the mosque is connected to either incident. Ottawa police aren’t currently treating it as a hate crime.

“You feel unsafe, you feel targeted, you feel terrorized in a way,” said Marhnouj of the attack on the mosque. “Anytime there is a media report about Muslims negatively, whether from here or elsewhere, we are all put in a basket: ‘Muslims are terrorists.’ We feel always we are guilty by association,” said Marhnouj. “I shouldn’t have to disassociate myself all the time from the actions of others to prove my allegiance.”

The vandalism is being denounced by the National Council of Canadian Muslims.

“An attack on any house of worship is reprehensible and we condemn it,” said executive director Ihsaan Gardee. “There have been other incidents that have occurred, so obviously there is a concern among the community of a potential backlash to the acts last week.

“But at the same time we are very confident that our fellow Canadians will see the attacks of last week for what they are: the acts of individuals who in no way represent the sentiments and feelings of the vast majority of Canadian Muslims, who reject outright these kind of violent acts that target innocent civilians and our fellow Canadians,” said Gardee.