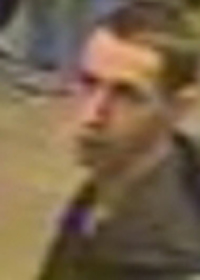 Detectives are hunting a man who grabbed a Muslim woman by the head and pulled off her face covering in a packed shopping centre.

The thug approached the woman from behind in Touchwood shopping centre, Solihull, on Saturday March 3 at 2pm. As she walked past the Disney Store he ripped the veil from her face and threw it on the floor before walking off.

Cops today released CCTV of the man they believe is responsible in an effort to track the thug down. Chief Inspector Kevin Doyle, from Solihull Police, said:

“Reports of crimes like this are exceptionally rare both in Solihull and the wider West Midlands. We are treating this incident as a hate crime as we believe the woman was deliberately targeted because of her faith, symbolised by her attire. I would urge anyone who recognises the man captured on camera to contact us as a matter of urgency.”