Five men arrested in dawn raids by counter-terrorism officers on suspicion of posting race hate material will not face any charges, The Northern Echo can reveal.

The suspects – including two men from the North-East – were detained in April when dozens of plain-clothed and uniformed officers swooped on several addresses across the UK. Computers, laptops and mobile phones were seized during the operation.

But last night, the North-East Counter Terrorism Unit revealed that, following discussions with the Crown Prosecution Service (CPS), it had been decided no charges would be brought.

Both were believed at the time to be linked to the North-East Infidels, a breakaway organisation from the EDL, whose Facebook page described itself as an alliance of “right-wing nationalists, patriotic and loyalist groups from different parts of the UK”.

All the suspects were released on police bail, pending further inquiries.

A spokesman for the North-East Counter Terrorism Unit said last night: “Officers carried out a full and thorough investigation into posts made on social networking sites. Five men were arrested on suspicion of publishing or distributing written material which may stir up racial hatred. Following liaison with the CPS, we were advised that no further action should be taken.”

A spokesman for the CPS said: “We did not get to the stage where we were provided with evidence to review or asked for a charging decision – so there was no decision not to charge, as it were. We were informed that the police were investigating the matter and then they informed us they had decided to close the investigation. We were made aware, which is entirely normal with cases of that nature.”

Note how differently Azhar Ahmed was treated over his offensive Facebook comments. After the initial, ridiculous attempt to charge him with a racially aggravated public order offence was abandoned, he was prosecuted instead under the Communications Act 2003, which makes it an offence to send over a public electronic communications network a message that is “grossly offensive or of an indecent, obscene or menacing character”. Ahmed was found guilty last week and although he has not yet been sentenced he faces a possible six months in prison.

Even if we accept there was no hard evidence that the Infidels were inciting racial hatred – and Expose had no difficulty finding some examples at the time they were arrested – are the police really asking us to believe that none of the material posted on social networking sites by the Infidels was at least of an indecent, obscene or menacing character? Or perhaps the police think the Communications Act doesn’t apply to the far right? 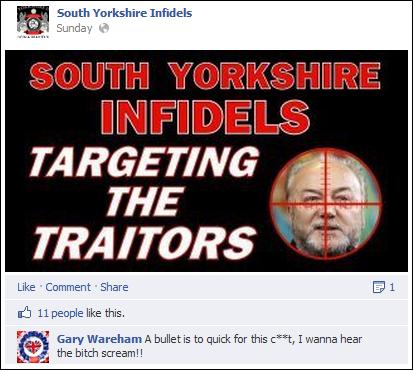