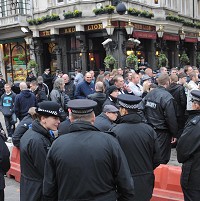 A member of the tented community outside the cathedral expressed gratitude to the police for preventing any violence. “It is fantastic if they are using their resources to try and stop people getting on to this site,” said Bryn Phillips, a member of the Occupy LSX community. “If this has prevented violence then I am pleased.”

The English Defence League had issued statements and made threats on Facebook to burn down protesters’ tents if they were still outside St Paul’s on Remembrance Sunday, according to Phillips. Some members of the EDL had also attempted to enter the encampment, most recently on Thursday night.

A statement by the EDL on Thursday was read to the Occupy LSX general assembly on Friday morning to make people aware that there was a threat being made. “They called us all sorts of names in the statement and said we should leave ‘their’ church and stop violating their religion,” said Phillips.

Later the Met said three of those arrested had been released on police bail pending further inquiries, and the others released with no further action.

Reports like this make a nonsense of the rosy view of the EDL presented in the recent Demos report Inside the EDL, which states: “Although there are some illiberal and intolerant sentiments voiced by some supporters in this survey (and at demonstrations), many members are in an important sense democrats. Allowing them to protest and demonstrate is an important way to ensure the group does not become more extreme.”

In line with this view, last year Jamie Bartlett spoke out against the ban on an EDL march in Bradford. According to Demos, when the EDL stage intimidatory demonstrations in areas with large Muslim communities, they are merely exercising their democratic right to peaceful protest, even though it requires a massive police presence to prevent these events ending in racist violence.

The EDL are in fact “democrats” only in the very limited sense that most of them attach some importance to voting in elections. When it comes to those they disagree with exercising their democratic right to protest, however peacefully, the EDL aren’t democrats at all.

Update:  The EDL have posted a denunciation of the police action, which they describe as “the beginning of the Police State in Britain”. The EDL claim: “There was no intention to confront the St. Pauls protesters. The EDL have no interest in them….”

This is the post from the EDL Facebook page on Thursday, to which Bryn Phillips of Occupy LSX refers: